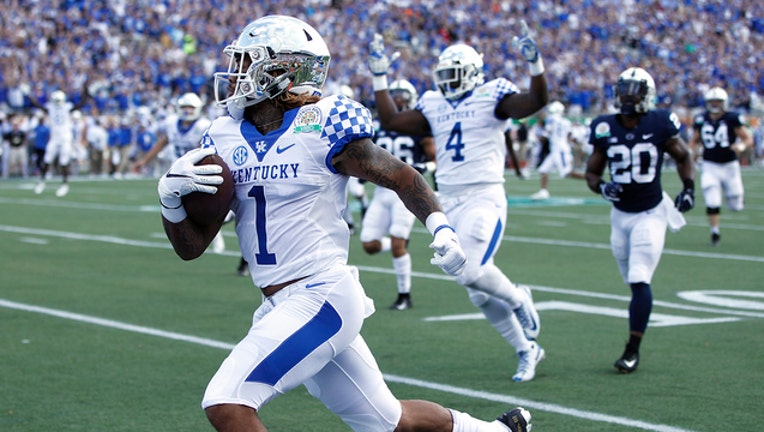 Lynn Bowden Jr. #1 of the Kentucky Wildcats returns a punt 56 yards for a touchdown against the Penn State Nittany Lions in the first quarter of the VRBO Citrus Bowl at Camping World Stadium. (Photo by Joe Robbins/Getty Images)

ORLANDO, Fla. (AP) - Benny Snell Jr. ran for 144 yards and two touchdowns to become Kentucky's career rushing leader and help the 16th-ranked Wildcats wrap up their best season in more than four decades with a 27-24 victory over No. 13 Penn State in the Citrus Bowl on Tuesday.

Snell scored on runs of 2 and 12 yards in the second half, then carried for a couple of crucial first downs to help Kentucky (10-3) run out the clock after Penn State's Trace McSorley trimmed a 27-7 deficit to three points despite playing with a foot injury.

McSorley threw for 246 yards and two touchdowns, and the Nittany Lions' career passing and wins leader also rushed for a team-high 75 yards on 19 attempts.

Lynn Bowden Jr. scored on a 58-yard punt return for Kentucky, and Southeastern Conference defensive player of the year Josh Allen had three of the Wildcats' six sacks.

Penn State (9-4) trailed 27-7 entering the fourth quarter, but McSorley's wasn't finished. His 1-yard TD run capped a 75-yard drive, and he followed with an 18-yard TD pass to Pat Friermuth to cut Kentucky's lead to six.

The Nittany Lions marched to the Kentucky 14 on their next possession to pull to within 27-24 with 4:12 left.

Thanks to Snell, a junior who already has declared for the NFL draft, McSorley didn't get the ball back until just one second was left on the clock.

Kentucky finished with its first 10-win season since 1977, when the Wildcats went 10-1.

Kentucky: Facing a tradition-rich opponent in a New Year's bowl was a big deal for the Wildcats, who made the most of the opportunity. Along with the three sacks, Allen blocked a field goal to key a strong defensive effort, while the offense shrugged off a slow start to help the Wildcats pull away in the second half.

Penn State: The Nittany Lions fell short of their goal to finish with 10 wins in three consecutive seasons for the first time since 1980-82. Three of their four losses were by a total of eight points.

Kentucky: Wildcats look to build on success they've had under coach Mark Stoops, who has transformed them into a Top 25 team. Their 5-3 record in SEC play represented their first winning mark in the league in 41 years, spawning heightened expectations for 2019.