Seattle - Even before making the move to the NFC West, Matthew Stafford could get a sense for the intensity of when Seattle and Los Angeles get together.

His first taste of the Rams-Seahawks rivalry will come in a place he’s never won before.

"I could feel it from afar when I wasn’t here," Stafford said. "You just know that there are two teams that have a bunch of pride. They both play at a high level. Really well-coached teams with a bunch of recent success. So, I’m excited to be a part of it. It’s exciting to get my first taste of it."

After seeing their unbeaten start to the season halted last Sunday, the Rams (3-1) face a quick turnaround for another division showdown against the Seahawks (2-2) on Thursday night.

For Stafford, it’s his first visit to Seattle since January 2017 when Detroit lost to the Seahawks 26-6 in the wild-card round of the playoffs. He’s 0-3 all-time in Seattle and 1-3 overall in his career against the Seahawks.

Stafford is off to a flying start with the Rams, racking up 1,222 yards and 11 TD passes with two interceptions and 9.1 yards per completion. But he is coming off his least impressive performance of the four in the Rams’ 37-20 loss to Arizona on Sunday.

"I think you can tell that the coaches are really trusting Matthew and giving him a lot of latitude to throw the ball a lot and spread the field," Seattle coach Pete Carroll said. "It’s obvious that they are really excited about what he contributes."

The Seahawks snapped a two-game losing slide by winning at San Francisco last Sunday, removing a bit of the urgency from this latest chapter against the Rams. It’s not a must win for Seattle, but with a favorable schedule in the coming weeks the Seahawks can go from teetering in the division to back in the NFC West race in a matter of five days.

There’s also the bitter memory of last January, when the Rams handed Seattle its first home playoff loss in 16 years.

"The playoff game, we didn’t play clean across the board," Seattle QB Russell Wilson said. "My biggest thing is just finding a way to win the game. That’s always my thing. We had a chance there, they ended up scoring late and then the game got away from us. It’s all about this year, this opportunity and what we can do." 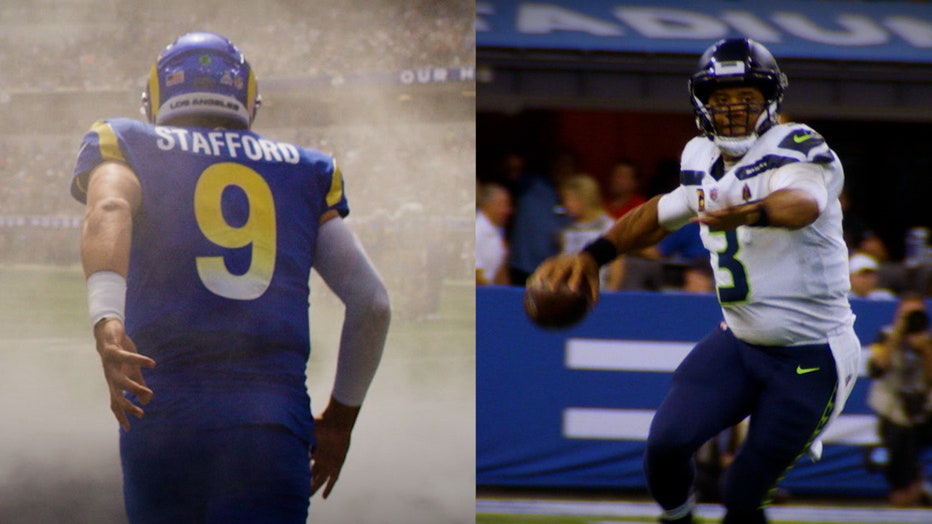 One of the early positives for Los Angeles has been its ability to protect Stafford and give him time to find options in the pass game. Stafford has been sacked only three times through four games. And pass rush is one of Seattle’s big concerns due to injuries. The Seahawks are hopeful Benson Mayowa (neck), Carlos Dunlap (toe) and Darrell Taylor (ankle) will all be able to play.

The Seahawks haven’t scored more than 20 points in their last four meetings with the Rams, but they’re now facing a Los Angeles defense that has taken a step back after finishing tops in the NFL in points and yards allowed last year. The Rams are 27th in yards allowed (396.8) and 18th in points allowed (24.8) after Tampa Bay and Arizona racked up 911 combined yards and 61 combined points in the last two weekends at SoFi Stadium.

The Rams lost defensive coordinator Brandon Staley to the Chargers, but they also lost four starters and a few key backups without signing any external replacements. Seattle will undoubtedly be looking to go after nickel back David Long Jr. after the Cardinals targeted him repeatedly in their win last week.

Aaron Donald is eager to resume his biannual chase of Russell Wilson as they enter their eighth season together in the NFC West. Donald’s 13 career sacks of Wilson are his most against any quarterback, but the three-time Defensive Player of the Year also affords Wilson more public respect than he gives any quarterback he faces regularly.

"He’s a playmaker," Donald said. "He’s different. He can do a lot of different things. We always talk about (how) he plays street ball, but he just plays good football. He’s a hell of a football player. Since I’ve been in this league, my rookie year, he’s been the same player as far as the things he’s been able to do in making plays and getting out of trouble with his feet or his arm."

When it comes to third-down offensive efficiency, the Rams and Seahawks are at opposite ends of the spectrum. The Rams are second best in the NFL at converting third downs at 54.3% early in the season. They are one of four teams at 50% or higher.

Then there’s Seattle. The Seahawks are 29th in the league at 33.3%. Their struggles on third down were highlighted last week when the Seahawks went the first five drives of the game without converting, and finished 2 for 10.