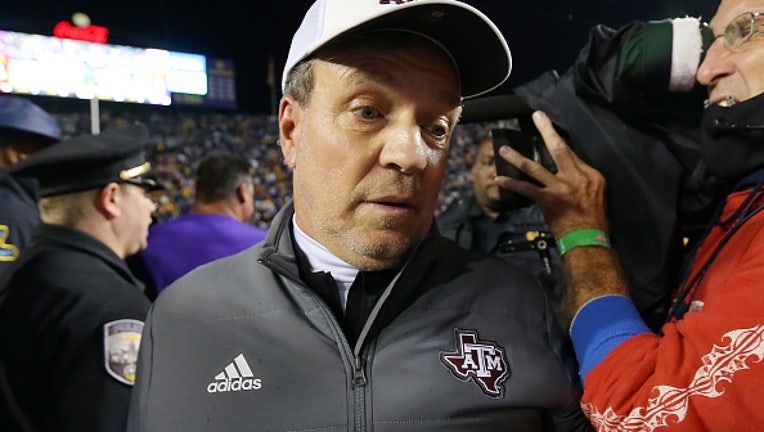 Fisher called for a press conference Thursday morning and tore into Saban. Fisher said Saban reached out to him but didn’t take the call, adding "we’re done."

"Some people think they're God. Go dig into how God did His deal. You may find out about a guy, a lot of things you don’t want to know. We build him up to be this czar of football. Go dig into his past or anybody who's ever coached with him. You can find out anything you want to find out what he does and how he does it," Fisher said.

He denied the Aggies broke any rules when they attained the No. 1 recruiting class in 2022.

"I don’t cheat. I don’t lie. If you did my old man slapped me across the face. Maybe someone should have slapped him (Saban)," Fisher said.

Saban made the claims at a conference in Birmingham.

"I know the consequence is going to be difficult for the people who are spending tons of money to get players," Saban said, via AL.com. "You read about it, you know who they are. We were second in recruiting last year. A&M was first. A&M bought every player on their team. Made a deal for name, image and likeness.

"We didn’t buy one player. Aight? But I don’t know if we’re going to be able to sustain that in the future, because more and more people are doing it. It’s tough."

Last week, the NCAA’s Division I Board of Directors approved guidance developed by a group of college administrators clarifying the types of NIL payments and booster involvement that should be considered recruiting violations.

The new guidance is effective immediately, but the organization neither changed its rules nor created new ones. The NCAA directed enforcement staff to look for possible violations that may have occurred before May 9, 2022, but to "pursue only those actions that clearly are contrary to the published interim policy, including the most severe violations of recruiting rules or payment for athletics performance."