AUSTIN, Texas - Marcus Carr made the go-ahead 3-pointer with a minute to play and Sir’Jabari Rice hit three free throws over the final six seconds, sending No. 10 Texas to a wild 79-75 win over No. 17 TCU on Wednesday night.

The Horned Frogs led by 18 in the first half and appeared in total control on their way to what would have been the program’s first road win over a top-10 opponent.

But then Texas (14-2, 3-1 Big 12) chipped away in the early minutes of the second half and rallied behind Rice and Dylan Disu, who combined for 27 points after halftime. Rice scored 10 in a row during one burst and Disu had 12 in a five-minute span as Texas tied it 71-all on his layup.

"In the Big 12," Longhorns interim coach Rodney Terry said, "we’re going to be in games like this all season long." 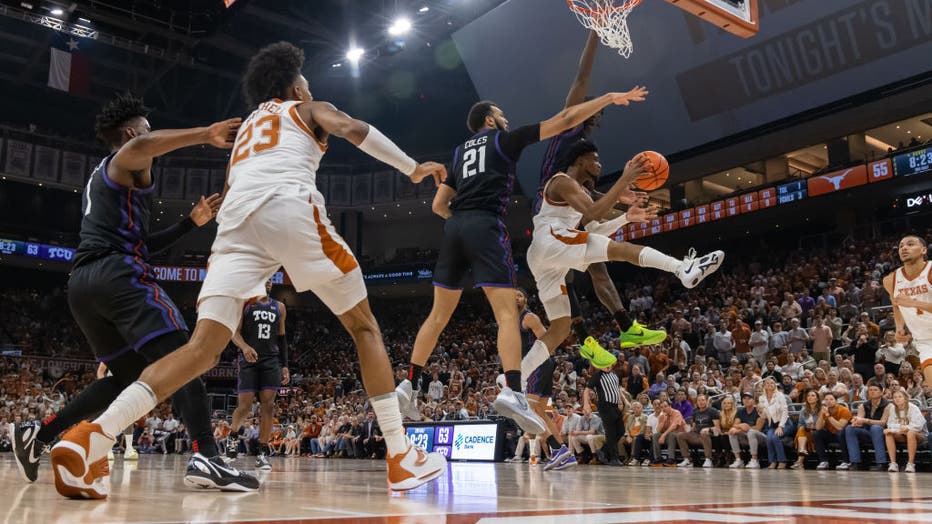 After Carr’s 3-pointer gave Texas the lead, TCU’s Emanuel Miller had a chance to tie it with a three-point play but missed the free throw. Rice got a rebound off a Longhorns miss at the other end and made two free throws to stretch the Texas lead.

"In the second half, we’ve got to pick up our pace and show our will," Miller said. "We’ve got to know every possession matters. In this league you mess up one possession, it can cost you the game."

The previous time the teams met in last season’s Big 12 tournament, Texas led by 18 at halftime only to watch the Horned Frogs rally to win.

Timmy Allen scored 17 points to lead the Longhorns. Rice had 15, all in the second half.

Texas shot 59% from the floor after the break in its largest comeback win since 2013, when the Longhorns rallied from 22 down in the second half to beat Oklahoma in overtime.

Allen started the rally with a steady diet of mid-range jumpers that seemed to loosen up the Horned Frogs’ defense for Disu to get to the basket for layups and dunks.

Texas trimmed the deficit to two, only to see the Horned Frogs push it back to 12 with about nine minutes left.

TCU: The Horned Frogs disrupted the Longhorns with quick hands and pickpocket steals that turned into early points. Texas had six turnovers before making five baskets — all on TCU steals. But those mostly stopped when Texas rallied. The Longhorns committed only three turnovers in the second half.

"Our defense was really good in the first half. ... We didn’t sustain it," TCU coach Jamie Dixon said. "They were just more physical and more active in the second half."

Texas: Every game the rest of the season will likely have the feel of an audition for Terry as school officials consider who will replace Chris Beard full-time next season. Terry is 7-1 since taking over the program when Beard was initially suspended after an arrest on a felony domestic violence charge Dec. 12. Beard was fired last week.

After giving up a whopping 116 points in a loss a week ago to No. 11 Kansas State, Texas has tightened up the defense. The Longhorns held Oklahoma State under 50 points, then outrebounded TCU by seven in the second half to limit the Horned Frogs’ possessions during the rally.

Carr and fellow guard Tyrese Hunter were just 7-of-24 shooting but combined for 13 assists.