AUSTIN, Texas - Tyrese Hunter seemed to be getting farther and farther away every time he let another 3-pointer fly.

No distance seemed out of his range.

Hunter scored 26 points and a led a 3-point shooting spree that pushed No. 11 Texas to a dominant 93-74 win over No. 2 Gonzaga on Wednesday night.

Hunter, last season’s Big 12 freshman of the year at Iowa State, was 9-of-14 shooting and made five of Texas’ 13 3-pointers. He made three from long range in the opening minutes of the second half as the Longhorns seized control.

"Big shout-out to my teammates for finding me. I don’t think I got one of them off the dribble," Hunter said.

Gonzaga couldn’t push Hunter far enough away from the basket. 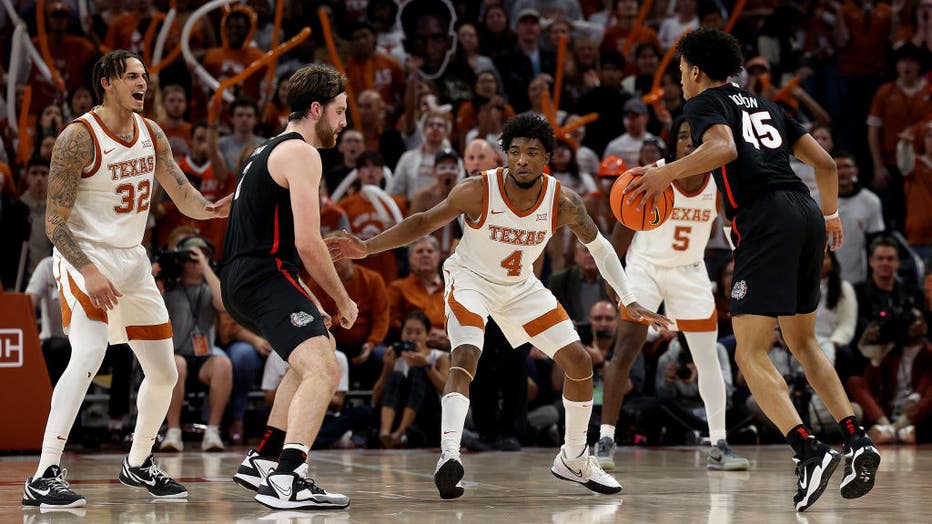 "They hit a lot of deep, deep 3’s," Bulldogs coach Mark Few said. "We knew he could shoot them, but not from 30 feet or whatever. He was feeling it."

Texas was 3 of 22 from long range in its previous game against Houston Christian.

Defensively, Texas (3-0) shut down All-American forward Drew Timme for long stretches and rendered him mostly ineffective when the game was still close. Two of his first four shots were airballs against switching double-team defenses.

Texas held Gonzaga to a single basket over the final five minutes of the first half and stretched a tight game into a 10-point halftime lead behind a rare scoring burst from defensive specialist Brock Cunningham. He made a 3-pointer and a reverse layup before tipping away a pass to Timme for his own layup that made it 47-37.

Texas broke it open with the flurry of 3-pointers to start the second half. Hunter struck first, then Dylan Disu was left wide open for another. Hunter then made two more before converting a three-point play on a steal and layup that pushed the Texas lead to 20.

"I’m pretty sure a lot of people were watching the game, saw who we are and what we’re about," Hunter said.

Gonzaga: The Bulldogs shot pretty well (49% overall with nine 3-pointers) but have a turnover problem. They finished with 20 turnovers, one game after they gave the ball away 18 times in a tight win over Michigan State on the deck of the USS Abraham Lincoln. The Longhorns turned those turnovers into 27 points. Point guard Nolan Hickman had four turnovers and two assists.

"Some of it was us, but a lot of it was their pressure," Few said. "We can’t function if we turn the ball over like that."

Texas: Disu was a big part of Texas’ ability to lock down Timme from the jump. At 6-foot-9, he’s the tallest Longhorn and a nagging leg injury kept him off the court for much of last season. His physical play around the rim will be key for a team that lacks overall size. He scored 12 points and hit two 3-pointers with his soft shooting touch, giving the Longhorns a critical piece on both ends of the court.

"He had great poise against a great player in Timme," Texas coach Chris Beard said.

Texas doesn’t play again until next week’s rankings come out and the Longhorns can expect to make a big jump.

All those turnovers have the Longhorns running a lot. Texas has outscored its first three opponents 55-3 on the fast break.

Gonzaga continues its rough early-season schedule with a home matchup against No. 4 Kentucky on Sunday.