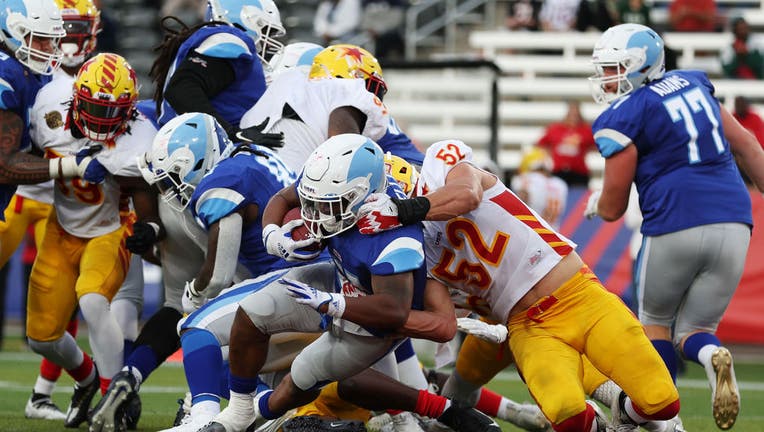 BIRMINGHAM, ALABAMA - APRIL 17: Jordan Ellis #31 of New Orleans Breakers scores a touchdown as Josh Banderas #52 of Philadelphia Stars defends in the third quarter of the game at Protective Stadium on April 17, 2022 in Birmingham, Alabama. (Photo by

After a game delay due to bad weather, the Tampa Bay Bandits faced off with the Pittsburgh Maulers Monday.

Jordan Lasley snagged a touchdown to give the Bandits a 17-point lead before halftime.

The Bandits' O-line worked hard to propel running back BJ Emmons into the end zone on their first drive of the game, and the squad's excitement was easily audible on the mics.

The New Orleans Breakers started off their United States Football League season with a bruising 23-17 victory over the Philadelphia Stars on Sunday.

It was the second contest in an exciting triple-header.

Vontae Diggs isn't taking his USFL shot for granted, and it showed on his first big play of the season, as he slid in front of Bryan Scott's pass and took it back to the house to put N.O. up 7-0 in the first quarter.

We don't know how Bug Howard got this open in the red zone with a minute left, and apparently, the Breakers didn't either.

His first TD brought Philly within two, and N.O. took a 9-7 lead into the half. Score one for the Stars, and one for the awesome nicknames department as well.

New Orleans took the lead early in the third, courtesy of this scamper off-tackle from T.J. Logan.

Philadelphia punched its opponent right back, as Darnell Holland made a house call from 42-yards out to knot things at 17. That's how the third quarter wrapped up.

Jordan Ellis put the Breakers back on top 23-17 early in the fourth, punching it in from a couple of yards out.

The hometown man Nick Vogel opened scoring for the Gamblers, who took a 3-0 lead on the strength of his right leg midway through the first quarter.

Defensive captain Reggie Northrup scooped up the loose pigskin following a forced fumble near the goal line and took it 90 yards the other way to build on the Gamblers' advantage.

Kevin Sumlin capitalized on the score by opting to go for two. His move proved successful, putting Houston up 11-0.

RELATED: USFL 2022: Everything you need to know

Houston's had one mission in mind during the first half: Poke the ball loose, and recover it. It did so for the second time in two quarters with this textbook tackle. 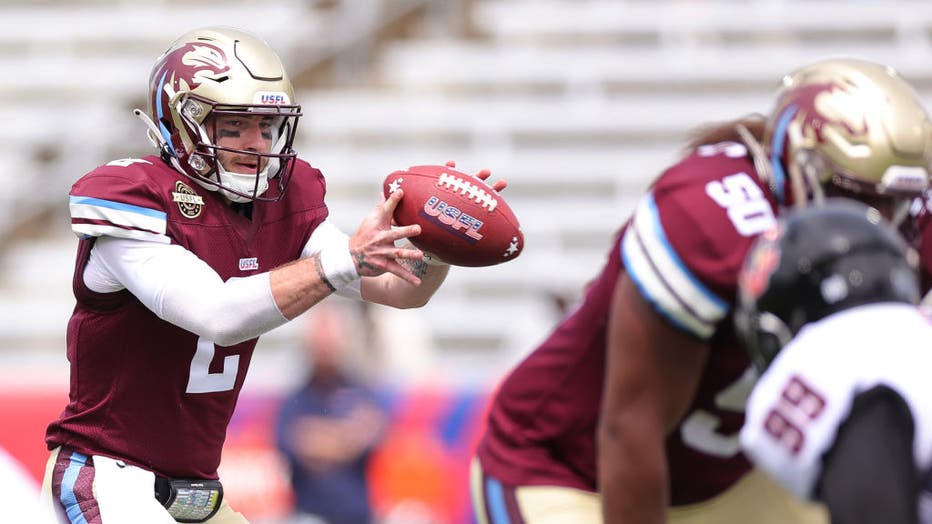 BIRMINGHAM, ALABAMA - APRIL 17: Shae Patterson #2 of Michigan Panthers catches the snap in the third quarter of the game against the Houston Gamblers at Protective Stadium on April 17, 2022 in Birmingham, Alabama. (Photo by Carmen Mandato/USFL/Getty

The Panthers were unable to make good on the INT though, and Houston forced a pair of pivotal stops as the clock wound down to stave off their opponent and collect its first-ever win.

"We came out hot, on fire," Houston linebacker Reggie Northrup said. "We executed that first half. Second half, it got a little rocky. We had to get back, get our mindset right. … a win is a win."

The Birmingham Stallions came from behind to defeat the New Jersey Generals 28-24 in an instant classic Saturday on FOX.

Generals QB Luis Perez launched a 49-yard rocket to Randy Satterfield for an explosive first play of the day. 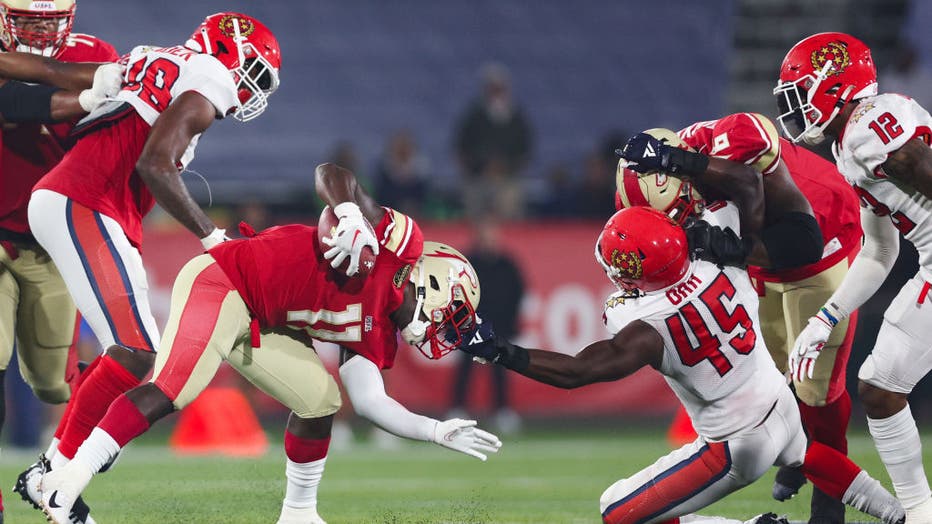 BIRMINGHAM, ALABAMA - APRIL 16: Chris Orr #45 of the New Jersey Generals grabs the face mask of Cj Marable #11 of the Birmingham Stallions during the fourth quarter at Protective Stadium on April 16, 2022 in Birmingham, Alabama. (Photo by Rob Carr/US

The duo followed that up with a quick 3-yard touchdown to take an early first-quarter lead.

Generals safety Shalom Luani was taking down anyone in his path and set the tone early with this tackle:

McGough's deep pass up the middle was intercepted by Luani, and just like that, the first takeaway of the season was on the books.

Perez found tight end Braedon Bowman for a 13-yard score to regain the lead in the second quarter.

Birmingham's defense came up with a big play before the half, as Stallions linebacker Scooby Wright knocked the ball out of Perez's hands as the Generals QB tried to scramble for the first down.

After Stallions safety Nate Holley came up with the fumble, he followed that up with a huge hit on Generals QB De'Andre Johnson, who checked in for Perez.

The Generals carried a 14-7 lead into halftime.

Johnson scrambled up the middle to Birmingham's 25-yard line, but the Generals weren't able to capitalize on the big pickup, and it remained a seven-point game midway through the third quarter.

Smith found Vic Bolden for a 17-yard pickup to move the Stallions down the field.

Then, Stallions running back CJ Marable found the end zone on a quick 3-yard rush to even things up at 14 headed into the final frame.

The Generals were the first to strike in the fourth quarter, as Johnson took it in himself for the score, capping off a 11-play, 65-yard drive with a score to make it a 21-14 game early in the frame.

The Stallions had something to say about that on the ensuing possession, as Smith linked up with tight end Cary Angeline fox six to knot things up once again.

The Generals took a 24-21 lead with less than two minutes to play after nailing a 47-yard field goal.

But the Generals' lead was short-lived.

With 29 seconds to spare, Smith found the end zone, capping off a 10-play drive with a score to give the Stallions a 28-24 edge that they held onto to secure the win.

Read more of this story on FOX Sports.