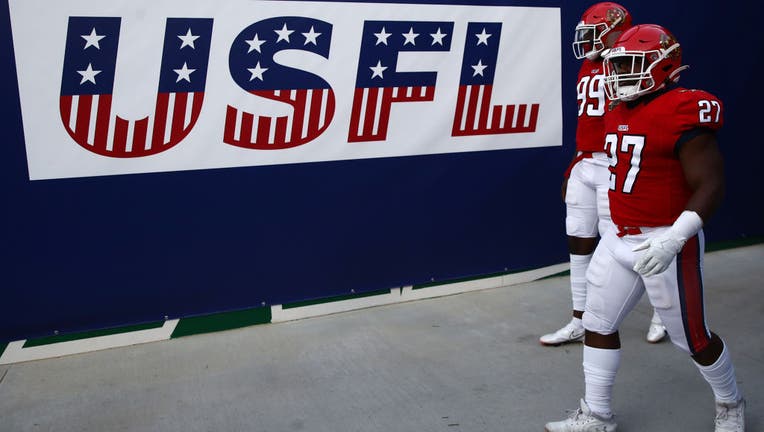 BIRMINGHAM, ALABAMA - APRIL 22: Tyshun Render #99 and Darius Victor #27 of the New Jersey Generals lead the team to the field before the game against the Michigan Panthers at Protective Stadium on April 22, 2022 in Birmingham, Alabama. (Photo by Tim

BIRMINGHAM, Ala. - Week 2 of USFL action gets underway Friday night with three more games to follow this weekend. Here's what the weather looks like and what you can expect from the teams at Protective Stadium in Birmingham, Alabama.

The Michigan Panthers (0-1) take on the New Jersey Generals (0-1) at 7 p.m. Central time Friday under a mainly clear sky. 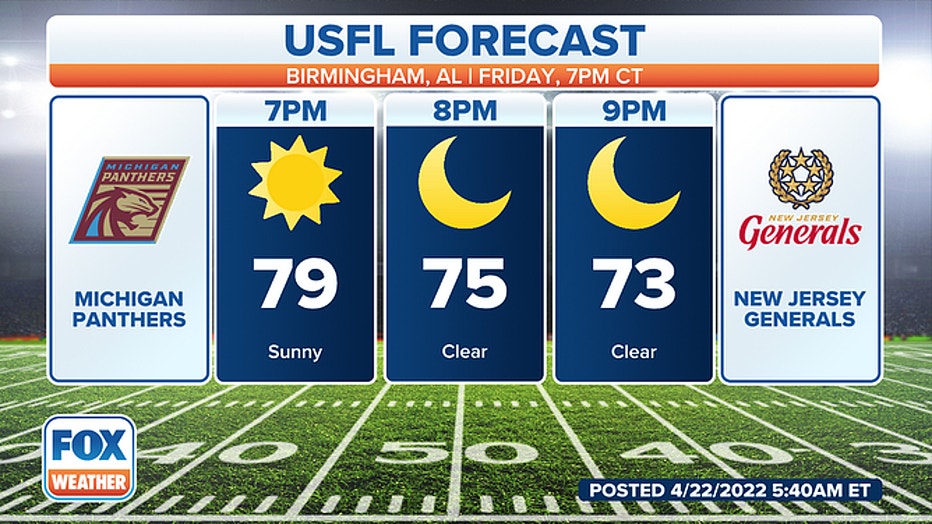 If you are watching the game, FOX Sports suggests keeping your eye on Michigan running backs Stevie Scott III and Cam Scarlett, who combined for 138 rushing yards on 33 carries last week. For New Jersey, quarterbacks Luis Perez and De'Andre Johnson will be the ones to watch.

Saturday's matchup at 11 a.m. Central on FOX will showcase the Pittsburgh Maulers (0-1) and the Philadelphia Stars (0-1). The weather looks beautiful for football under a sunny sky with a high near 84 degrees. Southeast winds will blow at 5 to 15 mph. 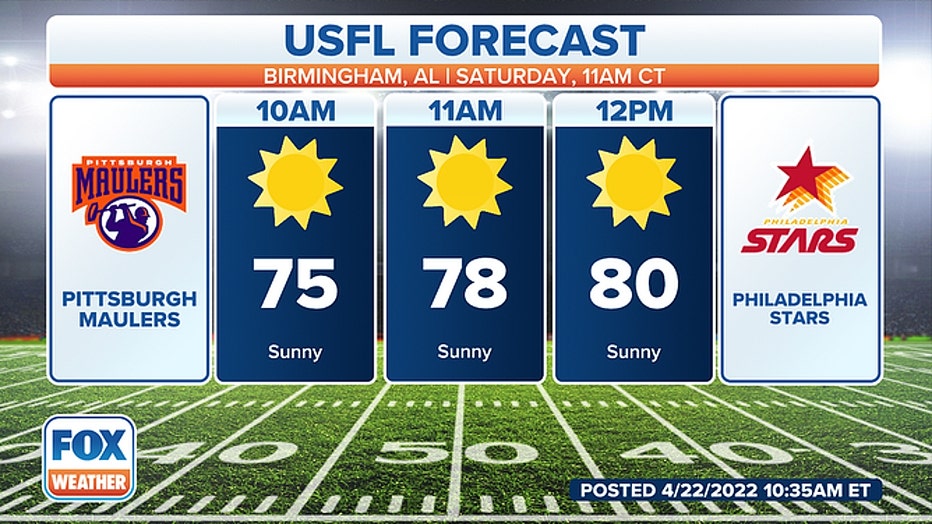 Pittsburgh linebacker Kyahva Tezino dominated in Week 1 with 12 tackles and an interception, FOX Sports reported, and is, without doubt, someone to watch for in Week 2. Stars receiver Chris Rowland also shined last week with nine targets, seven receptions and 74 receiving yards.

In the Saturday evening showdown, the Birmingham Stallions (1-0) battle the Houston Gamblers (1-0) at 6 p.m. Central. Some clouds will move in as temperatures stay near 80 degrees by halftime. 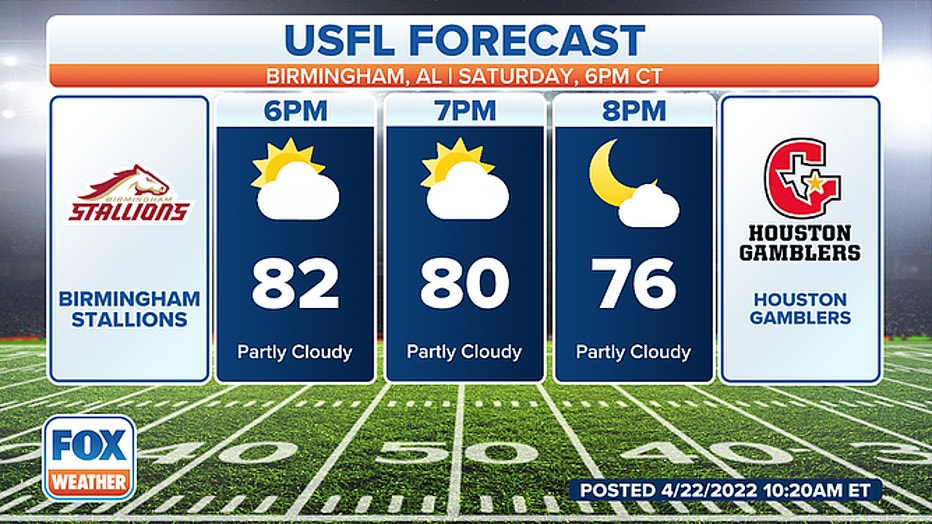 Some keys to the game, FOX Sports said, will be Birmingham receiver Osirus Mitchell, who had five receptions for 96 yards last week. Houston linebacker Donald Payne will be hard to get past after his 19 tackles in Week 1.

And the weather should be nearly perfect for the Breakers' backfield duo of Jordan Ellis and T.J. Logan Jr. FOX Sports reported they combined to rush for 145 yards on 33 carries (4.4 yards per carry). However, Bandits quarterback Jordan Ta’amu will be a challenge after his 185 yards last week. 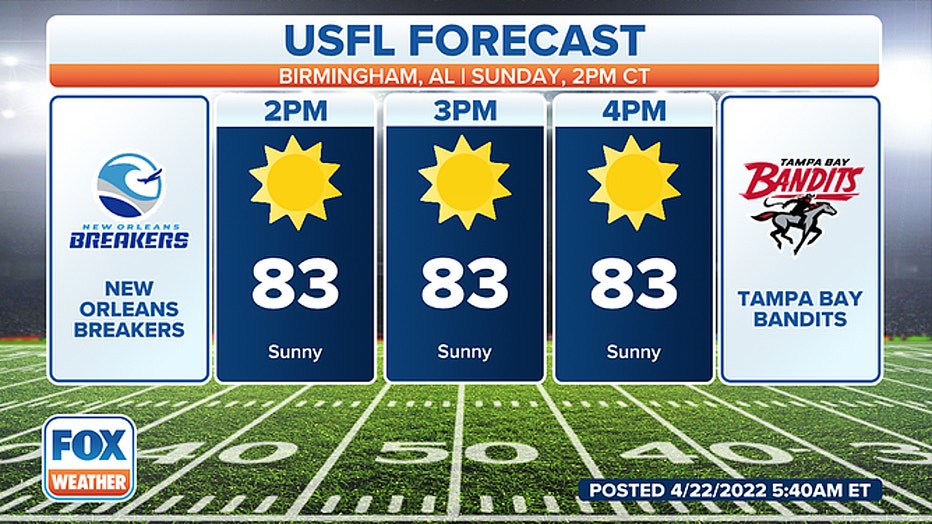 With FOX, you get a front-row seat to both the game and the weather at Protective Stadium. Aside from watching the action on TV, you can also watch from above the field, thanks to an exclusive partnership with WeatherSTEM and FOX Weather.

Crews with WeatherSTEM installed a new, state-of-the-art weather station on a rooftop just across the street from the field. It's not only going to give you all the weather details of what's happening in downtown Birmingham, but specifically what's happening in the stadium during the games.

The state-of-the-art weather station will stream live wind speed and direction, rainfall, temperature and humidity data, and it will also provide a live camera.

GET UPDATES ON THIS STORY AT FOXWEATHER.COM