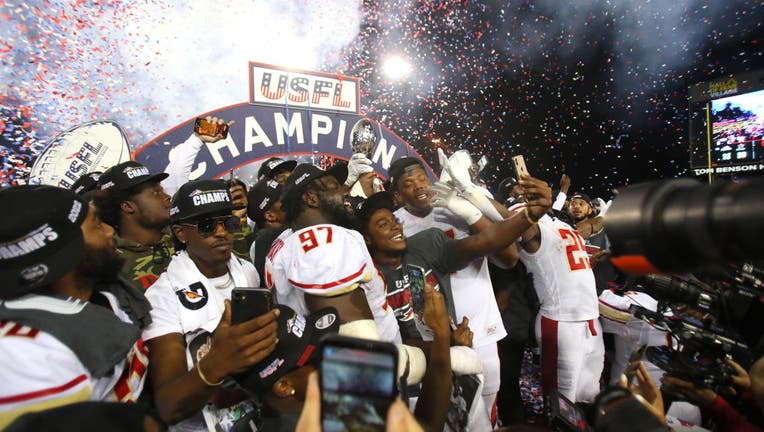 CANTON, OH - JULY 03: The Birmingham Stallions celebrate with their trophy after defeating the Philadelphia Stars 33-30 and winning the USFL Championship at Tom Benson Stadium in Canton, Ohio on July 3, 2022. (Photo by Michael Longo/Icon Sportswire v

The USFL set a date Monday for the kickoff of its second season.

The league announced that April 15 will begin year two of the upstart spring football league, which became the first in nearly four decades to run a successful inaugural season and return for a second. The league also announced that Birmingham Stallions fans can start to pre-register for season tickets on Ticketmaster.

Stallions head coach Skip Holtz and running back Bo Scarbrough will be in Birmingham to celebrate the team’s championship at Avondale Brewing Company located near Birmingham-Shuttlesworth International Airport.

"Bo and I are thrilled to be back in Birmingham today to celebrate our USFL Championship with our fans," Holtz said in a news release. "We can’t thank our fans enough for the incredible support they gave us during our championship run throughout the USFL’s inaugural season. All of our players and coaches look forward to returning home to Birmingham next March for training camp and to start our title defense at Protective Stadium on Saturday, April 15."

Birmingham Mayor Randall Woodfin added, "The City of Birmingham is honored to have played home to the inaugural USFL season. Our community embraced the Birmingham Stallions and rallied behind them as they won the USFL Championship. We look forward to again partnering with the other stakeholders to host the Stallions this spring as they defend their title."

The Stallions defeated the Philadelphia Stars in July to capture the title. In the offseason so far, the New Orleans Breakers hired veteran NFL coach John DeFilippo to replace Larry Fedora.

The USFL has already had an impact in the NFL with several players making rosters. KaVontae Turpin being one of them as a special teams star for the Dallas Cowboys.