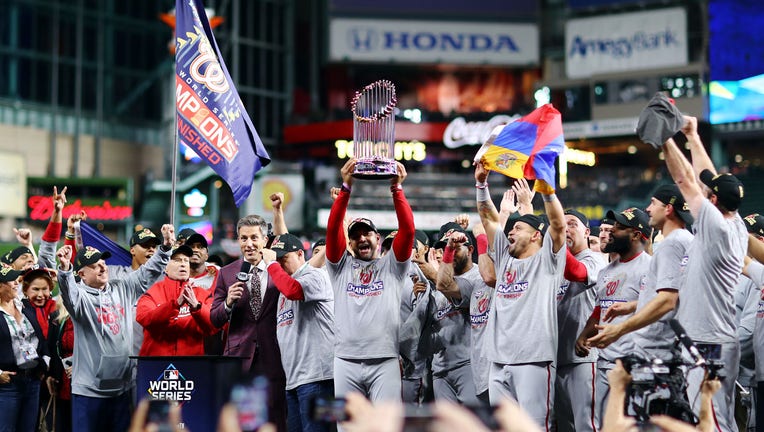 Manager Dave Martinez #4 of the Washington Nationals hoists the Commissioners Trophy after defeating the Houston Astros 6-2 in Game Seven to win the 2019 World Series. (Photo by Mike Ehrmann/Getty Images)

WASHINGTON - The World Series champion Washington Nationals will visit the White House on Monday, according to the administration.

Historically, championship sports teams are invited to visit the White House by the president, but a polarized political climate has complicated the tradition.

So far, only Nationals releiver Sean Doolittle has reportedly said he won't be attending the event.

The 2018 champion Boston Red Sox visited in May of this year, however several players, including manager Alex Cora, did not attend.

Trump has sparred with professional athletes over White House visits and invitations.

Nationals fans booed President Trump as soon as he was shown on the big screen during Game 5 of the World Series on Sunday at Nationals Park. Video courtesy of Dante Verme.

The feud erupted as Trump was lambasting NFL athletes for kneeling in protest during the national anthem.

The University of Virginia men's basketball team said earlier this year it could not agree on a date for a visit.

Trump hosted the Air Force Academy football team at the White House for a Commander-in-Chief's trophy ceremony in May and the champion Clemson Tigers football team in June.

The president was notably booed when he visited Nationals Park for Game 5 of the World Series.