Another day of dry conditions and high winds will lead to extreme fire weather concerns across the Plains on Wednesday.

Relative humidity levels held steady overnight, remaining between 20 and 30% across the Central and Southern Plains.

However, as the day continues, those levels will drop into the single digits across much of New Mexico and into the Texas and Oklahoma panhandles.

Winds will be strong across the region as well.

Southern New Mexico and West Texas will see calmer winds during the day, but they will get stronger as you head north.

By Wednesday afternoon, winds will gust to between 20 and 30 mph in Amarillo, Texas.

Wichita, Kansas, and Oklahoma City will see gusts between 30 and 40 mph. 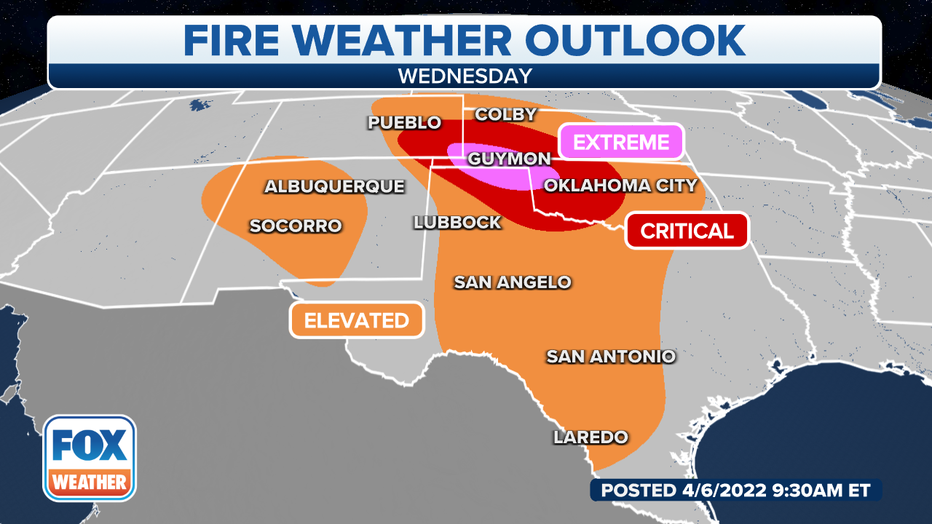 Extremely dry conditions and strong winds are the perfect combination for wildfires to grow and spread rapidly if any were to ignite. (FOX Weather)

The strongest winds will be felt between Scottsbluff, Nebraska, and Colby, Kansas, where gusts could top 60 mph in some areas.

And because of the strong winds expected, High Wind Warnings and Wind Advisories have been issued.

Wind Advisories stretch across areas from Dallas and Austin, Texas, into Oklahoma City.

High Wind Warnings are in effect across western Kansas through central and western Nebraska, most of South Dakota and into eastern North Dakota.

Where conditions are the driest and winds are strongest, fire weather conditions will reach extreme levels across the Texas and Oklahoma panhandles.

Central and western New Mexico will also see an elevated risk of wildfires.

Fire Weather Warnings are in effect across many areas of the Plains and Southwest.

South Texas from Del Rio to Corpus Christi is included in those warnings, as well as North Texas, most of central and northern Oklahoma, most of Kansas and eastern Colorado.

Fire Weather Watches are in effect in Central Texas.

The latest cold front was a dry and windy one. As it arrived this morning we didn't see any rain but it sure did stir up the oak pollen and dust. Zack Shields has the details.

The lack of snowfall during the winter and reduced rain during the spring has much of the region dealing with significant drought issues and unseasonably high fire danger levels.

The stretches of dry weather have kept firefighters busy.

Crews report battling several large wildfires from the Plains to the Southeast and into the Tennessee Valley.

The National Interagency Fire Center reports that year-to-date, the U.S. has already seen around 20% more acres burned than during the 10-year average.

Climate outlooks indicate the dry weather will continue through April and could last into the summer because of La Niña.

The National Significant Wildland Fire Potential Outlook shows areas under the threat of significant wildfires expanding in coverage through the summer.