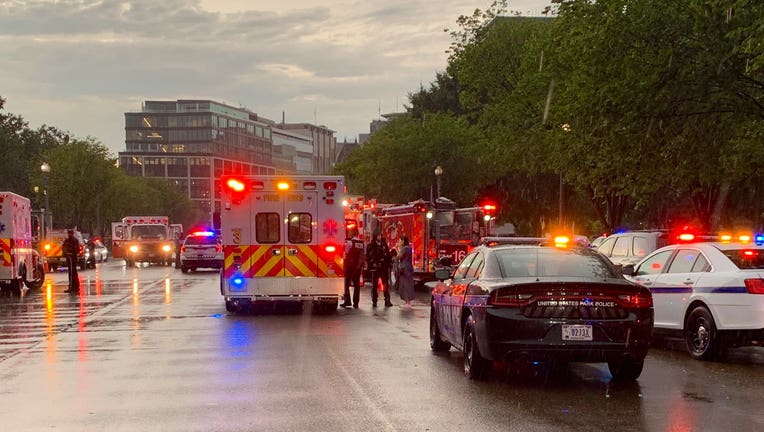 First responders on the scene after a lightning strike in Lafayette Park, Washington, D.C. (DC Fire and EMS)

A 29-year-old bank executive from Los Angeles was identified as the third person who was killed in Washington, D.C., by a lightning strike last week.

"Brooks was an incredible young man who will be remembered for his generosity, kindness and unwavering positivity," City National Bank said in a statement on the death of employee Brooks Lambertson, according to the LA Times. "His sudden loss is devastating for all who knew him, and his family, friends and colleagues appreciate the thoughts and prayers that have poured in from around the country."

Lambertson was killed Thursday evening while he was in the nation's capital for a business trip, the LA Times reported. A couple celebrating their 56th wedding anniversary, identified as James Mueller, 76, and Donna Mueller, 75, of Wisconsin, were also killed by the strike.

Lambertson was a vice president for City National Bank, the LA Times reported, and managed sponsorships for the bank over the last three years. He previously worked for the LA Clippers.

D.C. Fire and EMS responded to reports of a lightning strike in the center of Lafayette Park, which is near the White House, around 6:52 p.m. local time on Thursday.

"We are saddened by the tragic loss of life after the lightning strike in Lafayette Park," White House press secretary Karine Jean-Pierre said in a statement on the deaths. "Our hearts are with the families who lost loved ones, and we are praying for those still fighting for their lives."