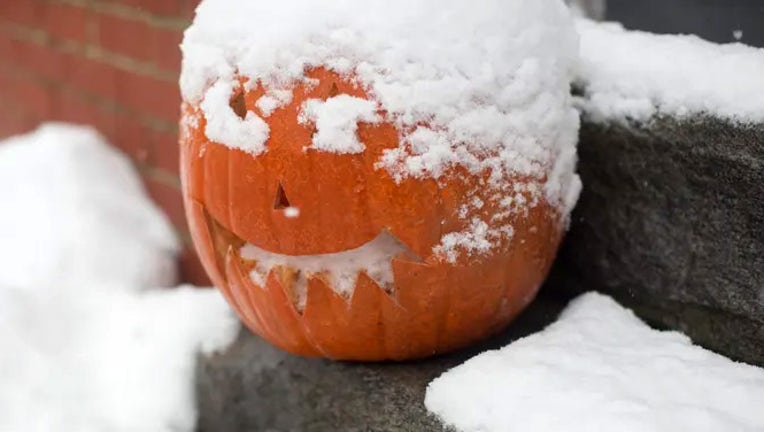 File: An autumn pumpkin with some snow in its eyes on Tuesday, Nov. 20, 2018. (Brianna Soukup / Portland Press Herald / Getty Images)

I'm dreaming of a white… Halloween?

That doesn't quite have the same ring as a white Christmas, but believe it or not, some parts of the U.S. actually have decent odds of seeing snow on Halloween each year.

Dr. Brian Brettschneider, an Alaska-based climatologist, compiled the map below, illustrating the historical probability of a white Halloween.

In order to qualify for a white Halloween, there must either be at least 1 inch of snow on the ground on the morning of Oct. 31 or falling snow must accumulate to at least 0.1 inches on that date. This is the same criteria the National Weather Service uses to define a white Christmas.

WHEN IS THE EARLIEST IT CAN SNOW IN YOUR CITY?

The map is based on historical weather data averaged over many years. Brettschneider noted that snowfall observations had to date back at least 40 years for a location to be included in his analysis. 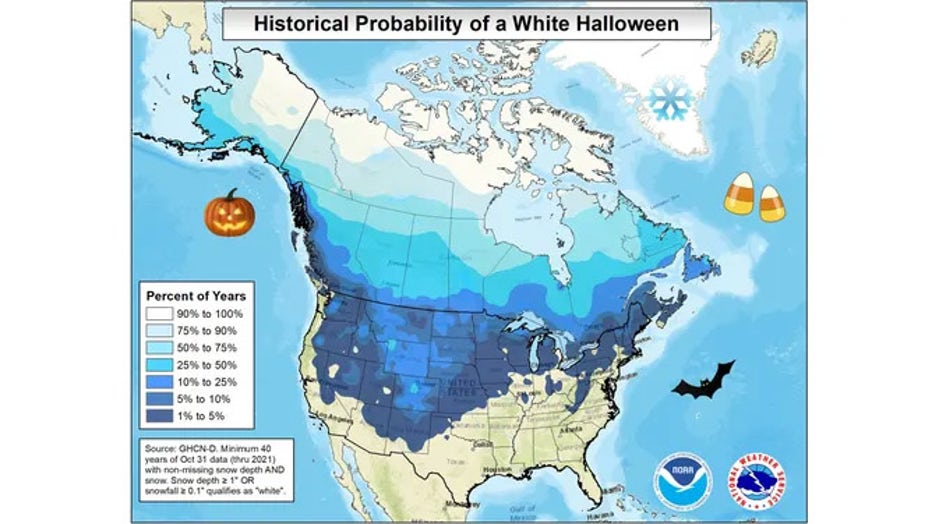 The historical probability of a white Halloween. (Dr. Brian Brettschneider)

In the Lower 48, trick-or-treaters have the highest odds of encountering snow on Halloween in the higher elevations of the northern and central Rockies, ranging from a 25% to 50% chance in the highest peaks west of Denver and in parts of Yellowstone National Park in northwestern Wyoming.

The probability is lower, 10% to 25%, for most of the Rockies, however. Parts of the Washington and Oregon Cascades, northern Plains, northern Minnesota and the western Upper Peninsula of Michigan also have 10% to 25% odds of a white Halloween.

A snowy Halloween is uncommon for the rest of the Lower 48, where the probability is generally less than 10%.

Much of the South has never recorded a white Halloween, though the odds are between 1% and 5% as far south as New Mexico and the Texas Panhandle.

YOUR WEATHER FORECAST FOR HALLOWEEN WEEKEND FROM COAST TO GHOST

If you really want to wear snow boots as part of your costume, head north to Alaska or northern Canada, where there is a greater than 50% chance of a white Halloween in some areas.

"Based on climatology, places from Anchorage northward have a greater than 50% probability of a ‘white’ Halloween," Brettschneider said. "Our friends in the Lower 48 are not as fortunate."