Hundreds of fire fighters showed up to combat a severe apartment complex fire in North Austin that injured 8 people.

AUSTIN, Texas - At least four people were taken to local hospitals following a three-alarm apartment fire early Friday morning. The Austin Fire Department and ATCEMS were dispatched to the fire around 4 a.m.

More than 30 residents have been displaced due to the fire.

According to ATCEMS, six ambulances and 100 firefighters responded to the Ventura Apartments at 9133 Northgate Boulevard in North Austin. The apartment complex is between West Rundberg Lane and U.S. Highway 183.

When first responders arrived, they reportedly found the building engulfed in flames with people trapped inside. Rescue efforts began immediately, according to the Austin Fire Department. 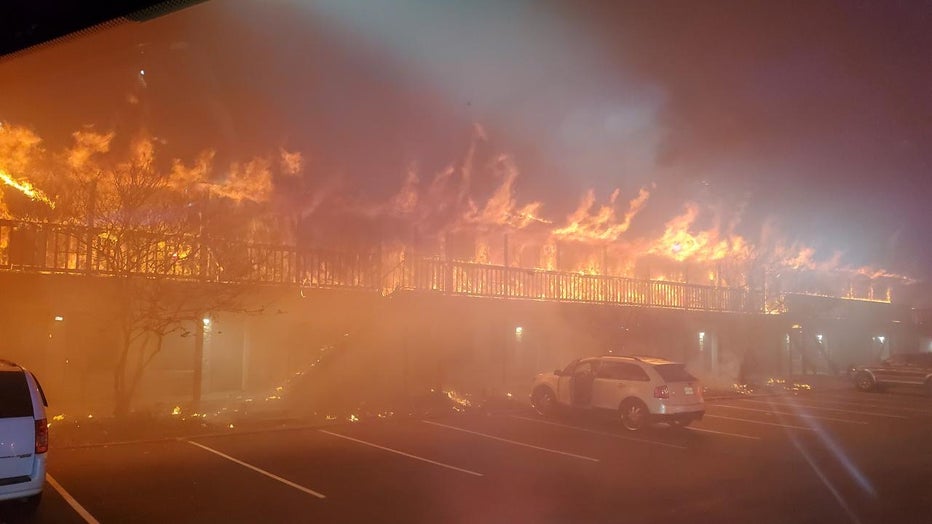 When first responders arrived, they reportedly found the building engulfed in flames with people trapped inside. Over 30 residents have been displaced due to the fire. (AFD)

According to ATCEMS, at least four people have been taken to hospitals for treatment.

Four other people reportedly didn’t want to be taken to a hospital. First responders were also able to rescue dogs, cats, and one possum during this apartment fire.

The apartment complex has 42 units. All residents have been displaced because of the extent of the damage, according to the Austin Fire Department.

Jessica Cruz was asleep with her child when the blaze began. When woke up she thought a stranger was breaking into her home. "It was a police officer trying to knock the door down to get me and my son out." she said.

The American Red Cross interviewed and coordinated housing with clients on Friday afternoon, they plan on placing displaced residents in hotels for now.

CapMetro reportedly sent buses to the apartment complex for residents to sit in and stay warm. Austin is in freezing temperatures this morning, according to Zack Shields.

The Red Cross is also on scene and assisting people displaced from the apartment building.

It appears the fire started on the second floor of the building, according to the Austin Fire Department. Firefighters are still working to determine the cause of the fire but is reminding residents to use caution with space heaters.

Residents are also encouraged to make sure their smoke detectors are working.