AUSTIN, Texas - A memorial at the Texas State Cemetery to those who died on 9-11 includes steel beams brought to Austin from Ground Zero in New York.

It is a powerful symbol, like the strong memory Desiree Solis has from that day.

“I remember watching it when I was in middle school, seeing it on the TV, my principal turned on the speaker and I remember him saying, pay attention to what’s on TV and the whole class just watched it happen,” said Solis. 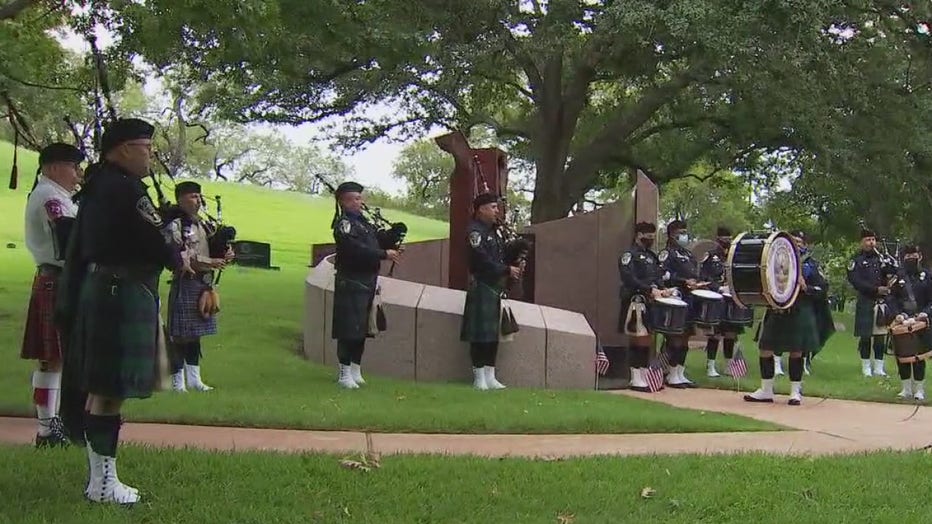 Solis and her family drove to Austin for this ceremony from San Antonio. The event there that they had planned to attend was canceled because of the pandemic. “People tend to forget about it because it was so long ago but I think we should remember that so many lives were lost,” said Solis.

The pipe and drum corps feature during the Friday morning observance at the cemetery was made up of police, fire and EMS officers from across the state. One of the members is Patrick Marlow’s sister in law.

“I think it’s important to remember, remember your loved ones keep those people dear and close to your heart never forget them even if it’s been one year, 10 years, 20 years,” said Marlow.

Nearly 3,000 were lost 19 years ago, among them 412 first responders. The service and sacrifice then in New York continue to set an example for those who serve now, a point made during the ceremony here in Austin.

“That sacrifice we vow never to forget, even though 2020 has been a year of COVID-19, social distancing, civil unrest and having parts of our community being divided, we as emergency services personnel stand united,” said Pipe & Drum Corps leader Sgt. Michael Crumrine.

The protests and riots are certainly powerful images that can not be ignored. But no matter how divisive things appear, those at the ceremony pointed to the attack 19 years ago. For some, it can also be a reminder, and a promise, of how the country can come together.

“As a society we have to continue to fight not to forget whether it’s through social media events like this you just can’t forget important days like this but I can’t get lost in the translation because there’s so much going on in the world but you got to take time to honor those that sacrifice,” said Matthew Solis.

It’s also important to remember that this is the eighth anniversary of the attack on the US Embassy facility in Benghazi. The attack in 2012 claimed the life of the U.S. ambassador to Libya and three other Americans.