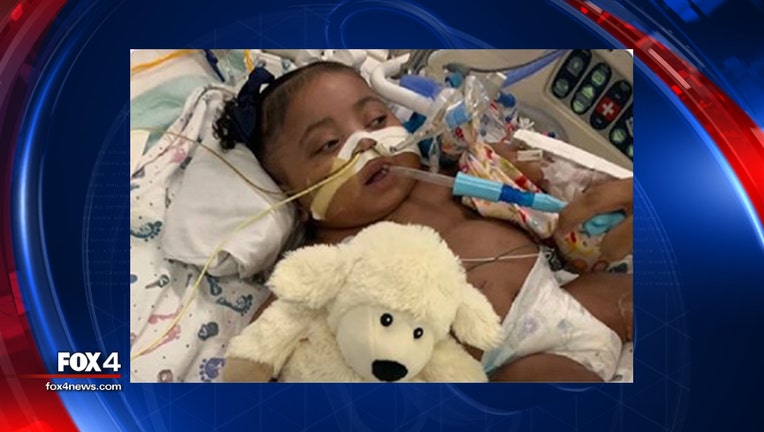 DALLAS, Texas - A Texas law that gives families 10 days to find a new hospital if they disagree with doctors who decide to take a patient off life support is once again under the spotlight after a judge halted a Fort Worth hospital's plan to remove a 9-month-old girl from a ventilator against her family's wishes.

The hospital said Tinslee was born prematurely with a rare heart defect and suffers from chronic lung disease and severe chronic high blood pressure. She has been hospitalized since birth and has been on a ventilator since July. Not only is her condition fatal, the hospital said, but doctors believe she's suffering.

But on Sunday, a judge granted Tinslee's family a temporary restraining order that gives them until Nov. 22 to find a facility that will take her, said Kimberlyn Schwartz, a spokeswoman for anti-abortion group Texas Right to Life, which began helping the family over the weekend.

Cook Children's says it has reached out to nearly 20 facilities around the country and none felt the hospital's assessment was incorrect.

Tinslee's mother, Trinity Lewis, said her daughter likes to cuddle and is "a fighter."

Here's a look at Texas law in such cases:

WHAT THE LAW SAYS IN TEXAS:

Texas law stipulates if doctors believe life-sustaining treatment should be stopped but the family does not, the disagreement can be taken to the hospital's ethics committee. If the committee agrees with the doctor, the "10-day rule" can be employed. If the hospital or family can't find a willing provider in that time, and unless a court grants an extension, treatment can be withdrawn.

Typically, the family would first talk to experts including a palliative care specialist and an ethics consultant, according to Dr. Robert L. Fine, clinical director of the Office of Clinical Ethics and Palliative Care at Baylor Scott & White Health in Texas.

Trevor Bibler, a professor at the Center for Medical Ethics and Health Policy at Baylor College of Medicine in Houston, said "usually these types of impasses are able to be broken" through time and mediation.

The 1999 Texas law shields doctors who follow the procedure from lawsuits.

WHAT THE LAW SAYS IN OTHER STATES

Texas is one of only a handful of states with such a law. Virginia and California have similar ones.

In most states, the law is not as detailed on the matter, said Thaddeus Mason Pope, a professor at Mitchell Hamline School of Law in St. Paul, Minnesota. "The Texas law is very, very clear: You are absolutely allowed to do this," he said.

He said the same process basically occurs in other states that don't have specific legislation and that hospital staff would just assess the legal risk of getting sued before proceeding.

HOW TEXAS' LAW CAME ABOUT

The goal of the law was to give families and doctors a say but keep the debates out of the courtroom.

"I think it's important for families to know that they're being heard and to be given an opportunity to understand where the doctors and the hospital are coming from as well," said Tom Mayo, a law professor at Southern Methodist University in Dallas.

Lawmakers, attorneys, doctors and anti-abortion groups were among those participating in a task force that helped craft the law. Among those was Texas Alliance for Life, a group that opposes abortion except to save the mother's life and also opposes euthanasia.

Joe Pojman, the group's executive director, says they "strongly support" the law's dispute resolution process. He says the law balances the family's autonomy with doctors' rights not to give interventions that cause harm or suffering.

The law doesn't stipulate who should be on a hospital's ethics committee, but at a large hospital, it would likely include dozens of people from different backgrounds including doctors, nurses, lawyers, and chaplains.

"We operate by consensus and we talk it out," Fine said.

WHAT THE GROUPS REPRESENTING THE FAMILY SAYS

Schwartz says her group believes "there shouldn't be a countdown placed on patients' lives."

In the 20 years that the law's been on the books, her group has helped more than 400 families, Schwartz said. It often takes "way longer" than 10 days to find a facility that will accept a patient, she said.

"Don't give the family just 10 days to navigate that complicated process. That's almost impossible for an average family to do," Schwartz said.

"Morally, these decisions should be left with patients and families," she said, adding that quality of life shouldn't be the only consideration.

OTHER CASES THAT HAVE GAINED ATTENTION:

Last year, a 9-year-old girl in Texas at the center of a three-week court battle with Cook Children's Medical Center to keep her on life support died after an appeals court allowed her parents more time to find a facility to maintain her life support.

Doctors had declared Payton Summons brain-dead and beyond hope of recovery after her heart went into cardiac arrest.