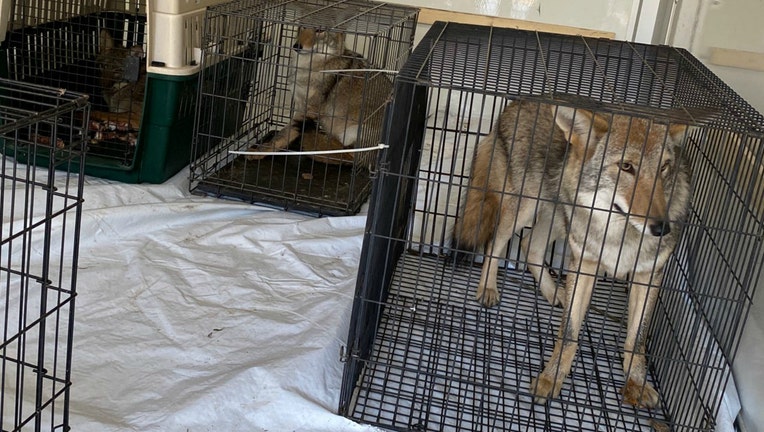 MUSKEGON, Michigan - Officials removed a half-dozen red foxes, three coyotes and other animals from an unlicensed rehabilitation center in western Michigan where the owner's 2-year-old granddaughter lost an arm after reaching into a pen that housed two wolf-dog hybrids.

State conservation officers searching the Howling Timbers facility Friday in Muskegon also found 47 dogs that are believed to have been crossbred with wolves or other wolf-dog hybrids, according to Michigan's Department of Natural Resources.

The agency said it learned in August that a girl had been bitten in July after putting her arm into a cage.

"No person should be allowed near those dogs," conservation officer Anna Cullen said in a release. "It's not fair to this child who lost an arm. We are doing everything we can to ensure the safety of anyone who may encounter any animal at Howling Timbers, including the health and safety of all the animals at the facility."

The Natural Resources Department, Muskegon County sheriff's office, and the state Department of Agriculture and Rural Development are investigating owner Brenda Pearson for operating the facility without required permits.

Pearson, 59, said Saturday that Cullen told her in July that she could start taking in wildlife at Howling Timbers and that she was licensed. But Cullen claimed after a surprise visit in September that she didn't have the authority to say the license was approved, Pearson told The Associated Press via telephone.

Pearson said she has been in business 27 years and continues to care for the wolf-dog hybrids because they can't be released into the wild. Pearson said the animals are not bred at Howling Timbers and that her organization collects them from inside and outside Michigan. It is illegal in Michigan to crossbreed wolves and dogs without a permit.

Her granddaughter may have reached through a chain-link fence for the collar of a penned animal when she was attacked, Pearson said.

"We ran over and picked her up and her arm was missing from the elbow down," she said.

There were no bite wounds on the arm when Pearson picked it up a short time later, she said.

The girl was rushed to a hospital where she underwent surgery on her right arm, Pearson added.