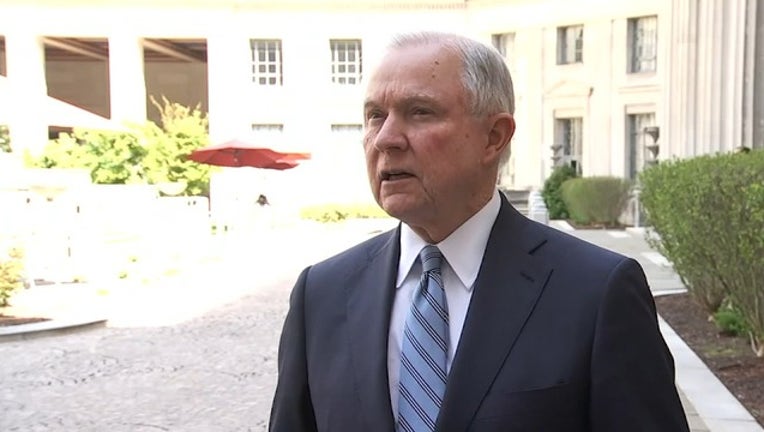 SAN DIEGO (AP) - U.S. Attorney General Jeff Sessions said Monday that the Department of Homeland Security had agreed to refer anyone who enters the United States illegally on the Mexican border to his office for prosecution.

"And the Department of Justice will take up as many of those cases as humanly possible until we get to 100 percent," Sessions said in remarks prepared for a speech at a law enforcement conference in Arizona.

Sessions said he has sent 35 prosecutors to the region to work on these cases, which will include people who allegedly smuggle children across the border or who lie to immigration officers.

The remarks were published on the department's website as Sessions prepares to hold a news conference in San Diego with Immigration and Customs Enforcement Director Thomas Homan.

Sessions' visit to Southern California comes about a week after hundreds of Central American migrants traveled to the U.S. border seeking asylum following a monthlong caravan through Mexico.

President Donald Trump and Cabinet members tracked the caravan and called it proof that more must be done to secure the border with Mexico, including building a wall.

Sessions called the caravan "a deliberate attempt to undermine our laws and overwhelm our system."

A month ago, Sessions ordered a "zero tolerance" policy aimed at people entering the United States illegally on the Mexican border.

olicy aimed at people entering the United States illegally on the Mexican border.