Rodney Smith, Jr. talks with FOX Television Stations about his challenge for kids to voluntarily cut grass for those in need.

From the Pacific Northwest to the East Coast, there’s no limit on how far Rodney Smith Jr. will travel to visit and congratulate the kids he has inspired.

In 2016, the 32-year-old launched the "50 Yard Challenge," encouraging children in all 50 states to voluntarily cut 50 yards for anyone in need, including the elderly, disabled, single parents and veterans. For every 10 lawns cut, participants will get a different color T-shirt. Once the milestone of 50 lawns is reached, children will earn a visit from Smith, no matter where they are in the world.

And he means it, detailing his travels and posting pictures of the champions on his Twitter and Facebook pages. He plans to visit kids in other countries once the COVID-19 pandemic subsides. 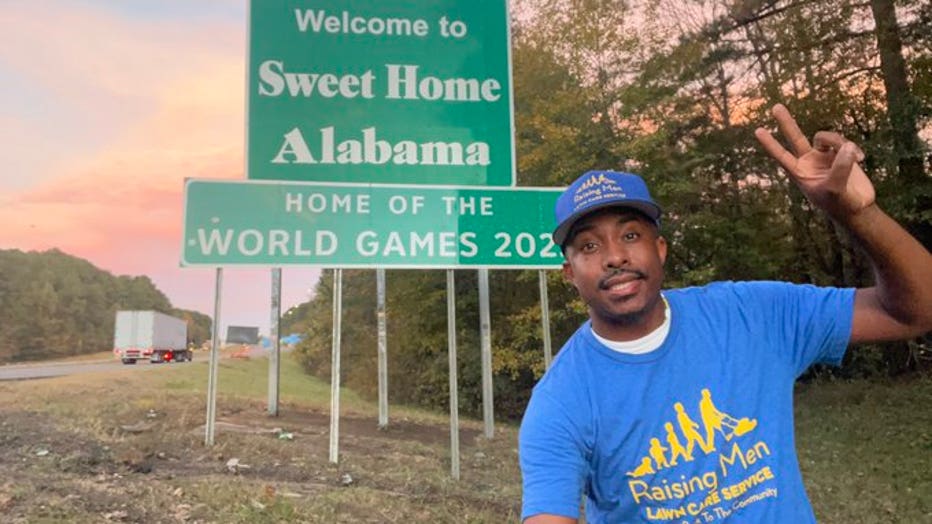 "A freshly cut lawn is akin to getting a new haircut," he told FOX Television Stations Wednesday on the way back from visiting a family in Harrisburg, Pennsylvania. "You feel proud. You like to show it off."

Smith said the challenge is part of the charity he founded called "Raising Men & Women Lawn Care Service" where he and volunteers mow lawns for free.

Smith said the idea came to him in 2015 after he noticed an elderly man mowing his lawn in Huntsville, Alabama, where Smith went to college and currently resides.

Nathan Adams,14, wants to voluntarily cut grass for veterans for free, in honor of his late grandfather who served in the U.S. Army and also taught him how to care for a yard.

"So I pulled over and helped him out because I saw he was struggling," he continued. "And then that night, I decided I would start mowing free lawns for the elderly and the disabled, single parents and veterans in Huntsville, Alabama."

He said his initial goal was 40 yards, but after posting his offer on social media, he mowed 100 yards in a month.

In case you're wondering how Smith Jr. currently supports himself while on the road, he said a lot of his income comes from speaking engagements.

"I’ve realized I don't need to make a lot of money as long as you do what you love," he added.

Smith came to the United States in 2009 from Bermuda to attend Alabama A&M University. He’s currently working to become a permanent U.S. citizen.

He hopes to inspire other people to make a difference in their communities.

"I want them to know there’s many ways to make a difference," he said. "It’s important to learn how to give before you receive."