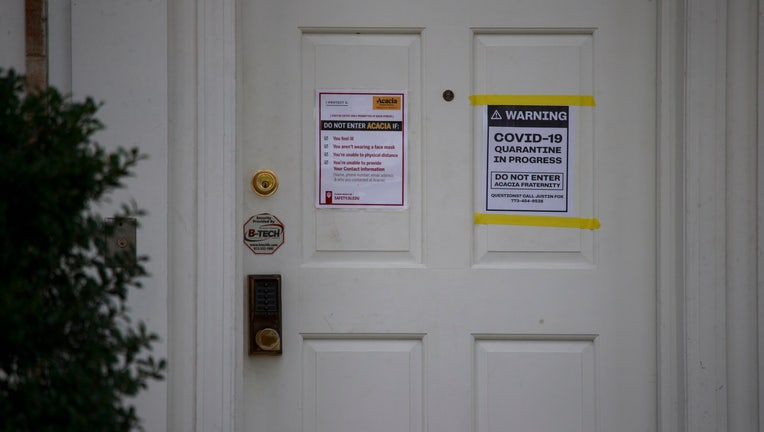 BLOOMINGTON, Ind. - Indiana University published a report on Thursday detailing a concerning level of positive COVID-19 cases within its Greek housing community, and the school has called for students living in fraternity and sorority houses to “re-evaluate” their current living situations.

“Greek houses at IU Bloomington are seeing this type of spread at quickly increasing rates,” according to a news release by the university.

Due to the nature of living conditions in a Greek house, which typically consists of a high density of residents, shared bathrooms as well as a high concentration of shared living, sleeping and dining spaces, university officials said they are extremely concerned that fraternity and sorority houses are “seeing uncontrolled spread of COVID-19.”

RELATED: UN health agency says no COVID-19 vaccine will be endorsed before it's safe and effective

A sports bar near the University of South Carolina in Columbia was seen packed with students on September 3, reportedly defying the university’s COVID-19 restrictions.

According to the school, 2,600 students currently live in Greek or various communal housing organizations who attend classes along with 42,000 IU students and 12,000 faculty members, including the surrounding community of Bloomington, Indiana.

School officials now say that coronavirus positivity rates in some of the fraternity and sorority houses are now above 50%.

Of the 42 houses on the school’s roster, 30 were under quarantine as of Sept. 4.

“Greek houses are owned and operated by their respective housing corporations. As such, IU Bloomington does not have authority to operate or manage these privately owned residences,” the university said in a release. “These entities were tasked with developing plans for safe living, quarantine and isolation, but many of those plans are proving to be ineffective in adequately providing for the health and safety of the students living in the houses.”

The news comes as college towns around the country grapple with rising coronavirus cases as many schools move toward renewed shutdowns because of too many parties and too many infections.

The University of Alabama has recorded over 1,000 cases on campus since the fall semester began last week. In closing the town's bars Aug. 31 for the next two weeks, Tuscaloosa Mayor Walt Maddox said that an unchecked spread of the virus threatens both the health care system and the local economy if students have to be sent home for the semester for remote learning.

With more than 300 students at the University of Missouri testing positive for the coronavirus and an alarming 44% positivity rate for the surrounding county, the local health director on Aug. 28 ordered bars to stop serving alcohol at 9 p.m. and close by 10 p.m.

Iowa’s governor has ordered all bars shut down around the University of Iowa and Iowa State, while the mayor of Tuscaloosa, Alabama, did the same in the hometown of the state’s flagship university.

“What we’re seeing in our violations is they’re coming late at night,” said Stephanie Browning, head of the health department for Columbia, Missouri. “Big groups gathering. They’re not wearing their masks, they’re not social distancing.”

In Utah, the city council in Provo overrode a mayoral veto to pass a mask mandate, which includes a $500 fine for organizing large mask-less gatherings, days before students return to Brigham Young University from around the country.

The outbreaks since students began returning to campus in the past few weeks have heightened tensions between colleges and their towns and led to recriminations between local politicians and university officials.

Three of North Carolina’s largest public universities have abruptly halted in-person undergraduate instruction and directed students to move out of the dorms after hundreds tested positive following their return to campus. More than 800 have been infected at the University of North Carolina at Chapel Hill and over 670 at North Carolina State.

Leaders at UNC-Chapel Hill, which has shifted to online classes, wrote an open letter Thursday to the mayor outlining steps the university is taking to curb off-campus parties.

“We recognize the very real problems with the behaviors of some of our fraternities and sororities,” the letter said.