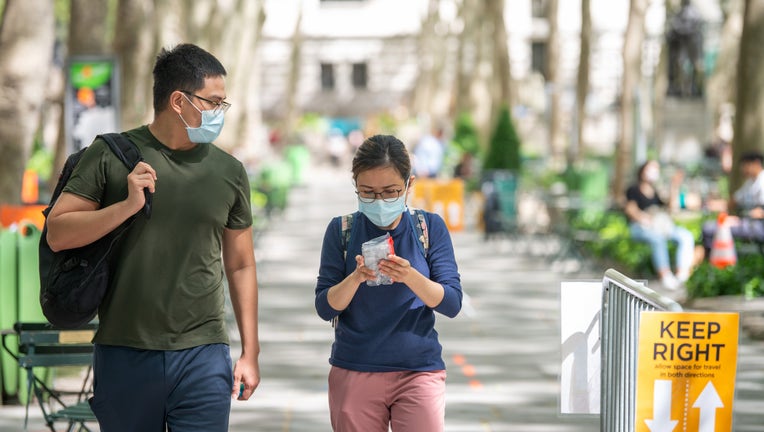 NEW YORK, NEW YORK - MAY 22: Two people wearing masks walk near an instructional social distancing sign in Bryant Park amid the coronavirus pandemic on May 22, 2020 in New York City. COVID-19 has spread to most countries around the world, claiming ov

On Saturday, 109 people died across the state from COVID-19, Cuomo said during his daily press conference. There were 84 deaths on Friday.

The daily death toll has hovered around 100 over the past week, a significant drop from the peak in early April when the number seemed more likely to hit 1,000 than fall below 100. It peaked at 799 deaths on April 8.

Cuomo said the state was now “decidedly in the reopening phase.” And he noted that the state’s curve was going down even as many places in the country were rising in deaths.

The latest tally from Cuomo came as the nation’s death toll from the coronavirus was approaching 100,000 on the eve of Memorial Day.

Here are the latest coronavirus-related developments in New York:

Mother nature played its part in social distancing Sunday, providing chilly temperatures and some clouds that discouraged people from flocking to beaches throughout the state.

Gov. Andrew Cuomo said Long Island will reopen Wednesday. He delivered his daily news conference from the shore in Wantagh on Long Island as an American flag flapped and deck chairs sat empty behind him.

He noted that masks will be mandatory on the Long Island Railroad, which will be disinfected daily.

Temperatures in the mid-50s in the morning on Long Island beaches were expected to reach the mid-60s by mid-afternoon, comfortable enough for those in light clothing but less so for the bathing suit-clad crowd.

Campgrounds and recreational vehicle parks were set to open statewide on Monday.

Professional athletes and their teams can resume training in New York state on Sunday, Cuomo said as he urged them to return to their facilities after a pause of more than two months due to the coronavirus shutdown.

Major League Baseball, the NBA and the NHL are discussing the resumption of their seasons with their players’ unions.

“To the extent people are still staying home, it gives people something to do. It’s a return to normalcy,” he said.

Gov. Andrew Cuomo’s administration is now acknowledging that state health officials have been trying to count the number of coronavirus patients discharged from hospitals to nursing homes, which have been ravaged by the pandemic.

The AP compiled its own tally of the number of such patients after the state Health Department refused to release an internal survey it conducted two weeks ago. The AP counted more than 4,500 recovering coronavirus patients sent to nursing homes.

At Cuomo’s news briefing Saturday, aide Melissa DeRosa answered an AP reporter’s question about the internal survey by saying, “I don’t think there’s any information that we have that we haven’t released at this point.”

The governor’s office clarified Sunday that DeRosa was unaware of the Department of Health’s efforts. The Health Department had previously told the AP it was still validating the data collected in its survey of nursing homes.

Cuomo signed an order March 25 requiring nursing homes to admit coronavirus patients well enough to leave hospitals. That order was intended to help free up hospital beds for the sickest patients, but critics have said it may have fueled deadly outbreaks by introducing people who were still infectious into highly vulnerable nursing homes.

Cuomo, who rescinded the order May 10, has said the administration was following U.S. Centers for Disease Control and Prevention guidance.