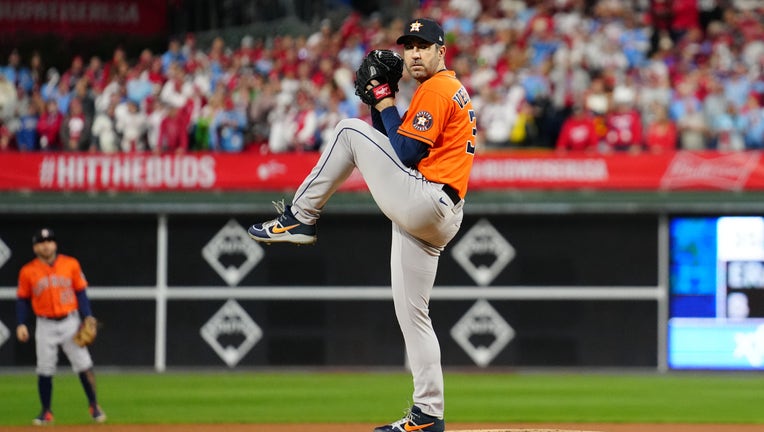 PHILADELPHIA, PA - NOVEMBER 03: Justin Verlander #35 of the Houston Astros pitches in the second inning during Game 5 of the 2022 World Series between the Houston Astros and the Philadelphia Phillies at Citizens Bank Park on Thursday, November 3, 202

PHILADELPHIA - Justin Verlander overcame an early jolt to grit out the World Series win that long eluded him, rookie Jeremy Peña hit a go-ahead home run and the Houston Astros beat the Philadelphia Phillies 3-2 Thursday night to head home with a 3-2 lead.

Buoyed by late defensive gems from Trey Mancini and Chas McCormick, the Astros moved to the brink of their second championship — the other was a scandal-tainted title in 2017.

Houston went ahead just four pitches in against Noah Syndergaard on Peña's run-scoring single. Then Philly's Kyle Schwarber homered leading off the bottom half, harkening to the five-run lead Verlander wasted in Houston’s opening 6-5, 10-inning loss.

Peña had three hits, including an RBI single in the first and an eighth-inning single that set up Yordan Alvarez’s run-scoring groundout. He made a leaping catch at shortstop to foil the Phillies in the third, then regained the lead an inning later with his fourth postseason homer. He's the first rookie shortstop ever to go deep in the Fall Classic.

After Jean Segura's one-out RBI single off Rafael Montero in the eighth, Ryan Pressly escaped a first-and-third jam by striking out Brandon Marsh and Schwarber on a nearly 100 mph one-hopper that was snagged over first base by Mancini.

The backup first baseman was playing defense for the first time since Oct. 5. He had pinch hit in the top half of the inning after 2021 Gold Glove winner Yuli Gurriel got into a collision during a rundown. Mancini fell into foul territory and reached back with his left foot to touch the bag on Schwarber's rip.

McCormick helped Pressly finish a five-out save. The center fielder made a leaping backhand catch against the chain-link fence in right-center on J.T. Realmuto for the second out of the ninth.

"I thought he hit it out," McCormick said.

After Bryce Harper was hit by a pitch, Nick Castellanos grounded out, ending a 3-hour, 57-minute thriller.

Verlander is among just five Astros remaining from the team caught using video to steal signs in '17. He had been 0-6 with an unseemly 6.07 ERA in eight Series starts dating to his rookie season with Detroit in 2006, a blotch in the career of 244-game winner likely to earn his third Cy Young Award this season.

While the Phillies and Astros were finishing up the Philadelphia stretch of the World Series, Philly sports fans flocked to Houston where the Eagles played the Texans on Thursday Night Football and many will head to Minute Maid Park to cheer on the Phils in game 6.

Pitching with an extra day of rest for his arm and stubble on his face, the 39-year-old right-hander gave up just the one run and four hits over five innings with four walks and six strikeouts — including four in a row in the fourth and fifth. He lowered that Series ERA to 5.63.

Philadelphia loaded the bases in the second on Segura’s single and pair of walks. Verlander wiggled out of trouble when he struck out Rhys Hoskins on a slider, then steadied himself.

He pitched with unusual care, throwing exclusively fastballs in 17 pitches to Harper over three plate appearances.

After Harper doubled on the last of those with two outs in the fifth, Verlander and Castellanos faced off in an epic 10-pitch at-bat. After trying two fastballs, two curveballs and his only changeup of the night, Verlander threw his fifth slider of the plate appearance and retired Castellanos on a flyout to short left, pumping a fist twice in excitement.

That was Verlander’s 94th pitch. Dusty Baker, nearing his first title in a quarter-century as a major league manager, went to his bullpen.

Astros pitchers struck out 12, raising their two-game total to 26.

Philadelphia lost consecutive games for the first time this postseason. The Phillies adjusted plans following the Game 3 rainout and wore vintage powder blue uniforms in the Series for first time since 1983.

Syndergaard made his first Fall Classic appearance since 2015 with the New York Mets and had been limited to three relief appearances since his previous start on Oct. 1.

Jose Altuve drove his second pitch high off the wall in right-center and took third when center fielder Marsh fumbled the pickup for an error. Philadelphia manager Rob Thomson made the unusual decision to move the infield in for the game’s second batter, and Peña lined a single to center.

Schwarber tied the score on Verlander’s second pitch, turning on a fastball and sending a no-doubt drive to right for his second home run of Series and fifth this postseason.

Harper walked with one out in the third and Peña jumped to grab Castellanos’ 105 mph scorcher. Alec Bohm singled and Verlander retired Bryson Scott on a flyout.

Peña jumped on a hanging curveball in the fourth for his fourth postseason homer, Syndergaard’s 44th and final pitch.

This was the third game in November, marking the first time a majority of the Series was played in that month.

Gurriel went his first 48 plate appearances of the postseason without a strikeout before whiffing against Connor Brogdon in the fourth. Gurriel trailed only Joey Cora’s 51 in 1995, David Eckstein’s 50 in 2006 and Juan Pierre’s 49 in 2003.