AUSTIN, Texas - Austin Animal Center (AAC) is partnering with Forklift Danceworks to present a free community event Dances for Dogs and People Who Walk Them.

Forklift Danceworks, an Austin-based dance company that focuses on equity and collaboration, will put on a performance at 2 p.m. that celebrates the stories of AAC workers and rescue animals. The event will also feature waived adoption fees, shelter tours throughout the day, and activity booths with local pet vendors and community partners.

Forklift's collaboration with AAC will revisit the choreography from the original Dances for Dogs and People Who Walk Them showcase, which was produced in 1999. The original showcase premiered in Austin in 2000 and featured dances between both dogs and their owners. The dance was held at Zilker Park and nearly 50 dogs and their owners joined in for the finale called the "Insta-Dog-Dance."

At the end of Forklift's AAC performance, the audience is invited to join in on the finale, which will be a recreation of the "Insta-Dog-Dance," a fun opportunity for dogs and their owners to appear in the showcase. 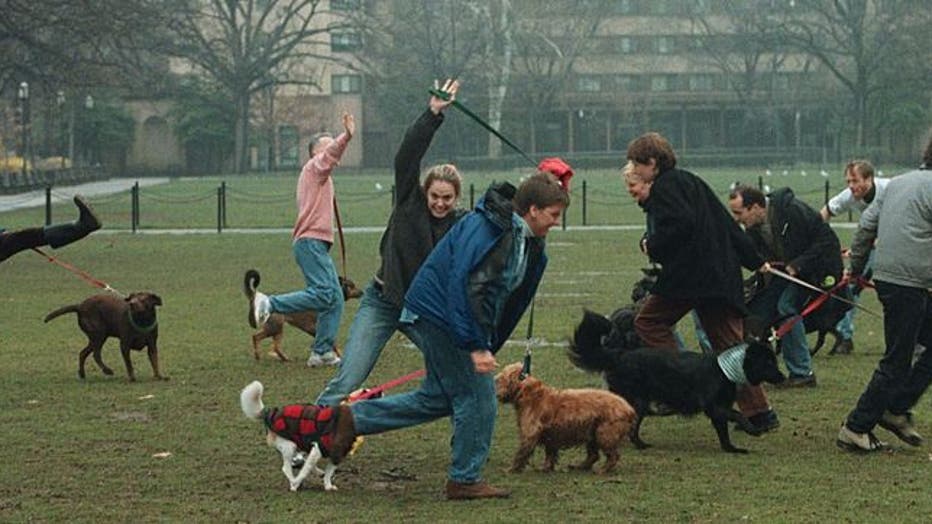 UNSPECIFIED - MARCH 21: "Dances for Dogs and People who walk Them" a series of short dances performed by dogs and their owners in Meridain Hill Park, Washington, DC. This is the grand finale of the Sunday 3/21/99 event. - (Photo by Dayna Smith/The Wa

"There is a natural dance that happens every day between dogs and the people who walk them — a dance that reflects their unique personalities, relationships, and environments," said Gretchen LaMotte, Forklift choreographer and programs manager. "Whether trotting along calmly or tugging on the leash ready to run and play, a dog’s movement tells a story. And the people who care for dogs are an integral part of that story. We at Forklift are thrilled to partner with the Austin Animal Center staff and look forward to celebrating their commitment to the animals and people of our city."

Dances for Dogs is free and open to the public. Free ticket reservations are encouraged to guarantee entry. AAC recommends those interested in attending should sign up for Forklift’s email newsletter to be one of the first to reserve tickets.