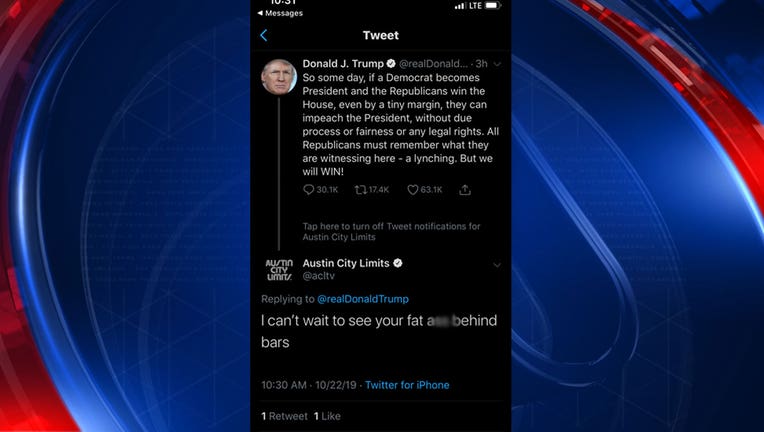 AUSTIN, Texas - The official Twitter account of long-time running music program Austin City Limits has apologized after the account replied to a tweet from President Donald Trump saying, "I can't wait to see your fat a** behind bars."

The response from @acltv was on a tweet from President Trump at just before 7 a.m.

The reply was taken down but not before FOX 7 Austin was able to grab a screenshot of it.

Austin City Limits issued an apology tweet at 11 a.m. saying that the tweet was "accidentally sent from this account" and that it "was certainly not intentional and does not exress the views of @acltv."

President Donald Trump injected racial overtones into the House impeachment inquiry Tuesday by comparing the Democratic-led investigation into his handling of U.S. policy toward Ukraine to a "lynching." The highest-ranking African American in Congress warned Trump about making the comparison.

Lynchings, or hangings, historically were mostly used by whites against black men and mostly in the South beginning in the late 19th century amid rising racial tensions in the U.S. By comparing the impeachment process to a lynching, Trump is also likening Democrats to a lynch mob.