The ordinance was approved by the Austin City Council on Feb. 6, creating slow-no wake navigational control zones for boats on Lake Austin under and around the Pennybacker Bridge, the area immediately north of the Tom Miller Dam, near the Oyster Landing Marina and the Walsh Boat Landing.

APD's Lake Unit has been conducting community education and engagement with boaters since this ordinance took effect on Feb. 17 to raise awareness and issue warnings. APD says the education period has now been extended until July 14 due to COVID-19.

After the extension is over, a boater may be cited for violating the ordinance, a Class C misdemeanor, and face a maximum fine of $500. A boater can also be cited during the education period if they have already been warned multiple times. APD says in order to take action, the Lake Unit must observe the violation.

APD says that the ordinance focuses on high-traffic spots for loading and unloading boats and other watercraft, swimming and other water recreation, and refueling. Boaters must operate at headway speed, or at the lowest possible speed needed to maintain control of the watercraft.

The zones are marked by buoys and signage at the boat ramps and nearby businesses.

In a January 31, 2020 memo to Mayor and Council, the City Manager recommended the creation of these two new no-wake zones: 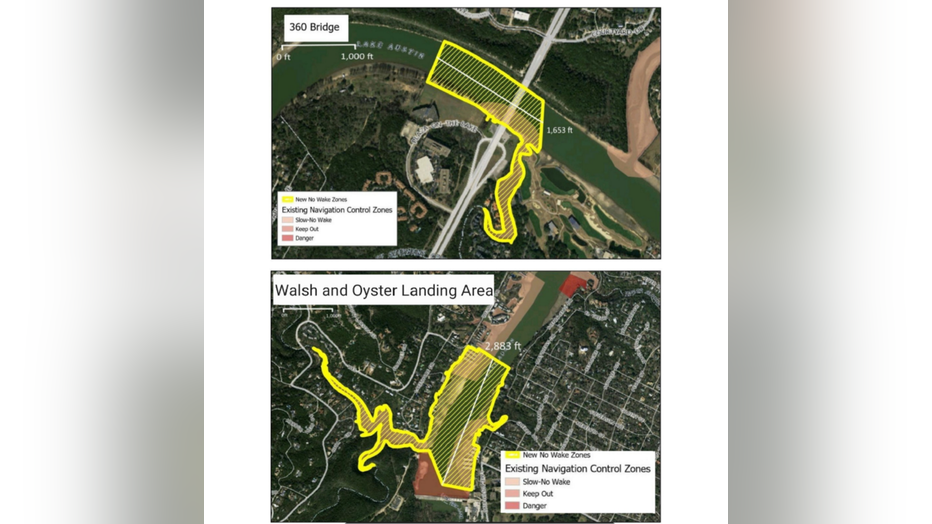 The new wake zones would be around and under the Loop 360 bridge and the Walsh and Oyster landing area.