The ban will begin Sunday, July 3, and end on Tuesday, July 5 at sunrise as outlined.

APD Lake Patrol will enforce City Ordinance 8-5-81 that prohibits personal watercraft, including the use of wet bikes, jet skis, motorized surfboards and similar devices. The ban only applies to Lake Austin.

The Ordinance states kayaks, canoes, and paddleboards are still permitted to be used, along with watercraft designed for the conventional manner of sitting or standing.

"The annual ban on personal watercraft is necessary to ensure the public's safety that use the lake and parks over the 4th of July Day Holiday Weekend," APD says.

Lake Austin will be patrolled by APD through the weekend. Those on the lake are being urged to follow the Texas Water Safety Act and City of Austin boating laws and ordinances. Police say one of the laws most boaters are unaware of is TWSA 31.123, the Required Response to Police Water Safety Vessel. The law states that the operator of a vessel underway, on sighting a rotating or flashing blue beacon light, shall reduce power immediately and bring the vessel to a no-wake speed and subsequently stop until the intention of the water safety vessel is understood.

APD also wants to remind the public about the extension of the new no/slow-wake zone (in purple) on Lake Austin by the Pennybacker (360) Bridge: 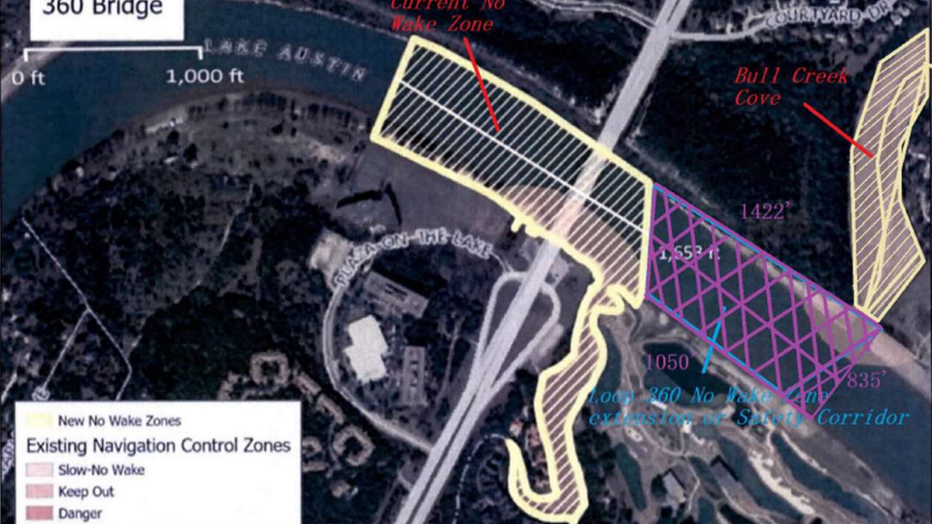 The Austin Parks and Recreation Department and the Austin Police Department say they want the public to enjoy the parks and lakes but urge people to make this a safe holiday.

Read the full ordinance below:

City Ordinance: 8-5-81 WATERCRAFT AND OTHER MOTORIZED CRAFT ON LAKE AUSTIN.

(A) A person may not use or possess a jet ski, wet bike, motorized surfboard, or similar device on Lake Austin:

(1) from sunset on the Friday before Memorial Day until sunrise on the Tuesday after Memorial Day;

(2) from sunset on the Friday before Labor Day until sunrise on the Tuesday after Labor Day; or