AUSTIN, Texas - Austin Fire Department investigators have released a description and photo of the man they are looking for in connection to the fire set at Congregation Beth Israel on October 31.

Investigators are looking for a white male with brown hair and a thin build. He was last seen wearing the following: 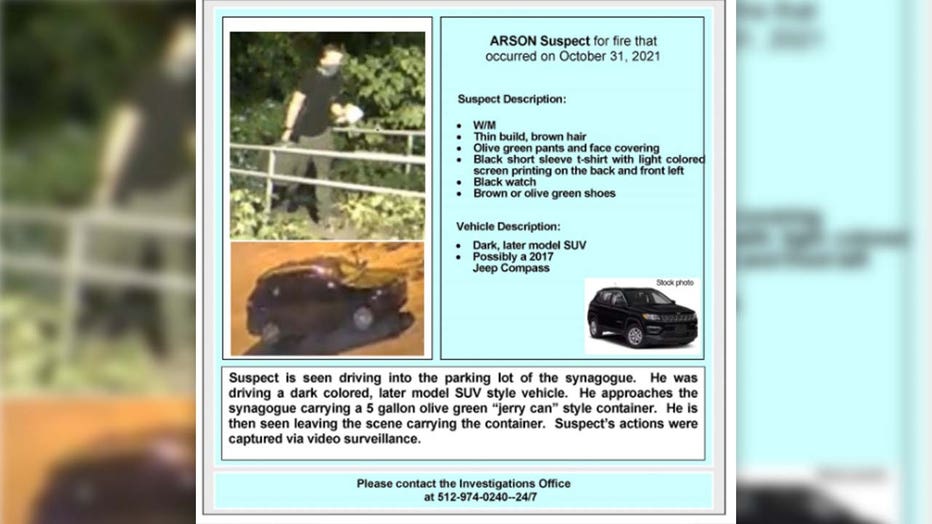 Officials say surveillance video captured the suspect driving into the parking lot of the synagogue in a dark, later model SUV which is possibly a 2017 Jeep Compass.

The suspect approaches the synagogue carrying a five-gallon olive green "jerry can" style container. He is then seen leaving the scene carrying the container.

According to AFD, the building sustained damage to the front, wooden doors, and some interior damage to floor mats and the door jam. The glass was also damaged by smoke, and one part of the glass appeared to be intentionally broken. AFD estimated a cost of $25,000 for clean-up and repairs. The fire was contained to the front entrance.

In response to the fire, city leaders from all faith backgrounds recently gathered at the Dell Jewish Community Center to show support for the Jewish community. The fire came on the heels of a couple of other incidents, though it's not clear if they're connected.