Remembering the victims of the helicopter crash that killed Kobe, Gianna Bryant

Multiple families lost their loved ones in the tragedy.

LOS ANGELES - On the morning of Jan. 26, 2020, nine people were killed when a helicopter crashed into a hillside on a foggy Sunday in Calabasas, Calif. The passengers and pilot were on their way to a basketball game at Kobe Bryant’s Mamba Sports Academy in Newbury Park, a town located to the west of Thousand Oaks, from Orange County's John Wayne Airport.

There, the Lady Mambas were scheduled to face other 14-under teams including the Fresno Lady Heat at the Mamba Cup basketball tournament held at the sports facility. Three of the victims of the crash were players on the team: 14-year old Alyssa Altobelli, 13-year-old Payton Chester and 13-year-old Gianna Bryant. But they never made it to the game.

The first sign of trouble was at 9:44 a.m. Sunday when the air traffic controller told Zobayan he was flying too low. The helicopter crashed three minutes later and just 41 minutes after leaving the John Wayne Airport, officials said.

One entire family was lost — mother, father and daughter. Another beloved mother and basketball coach was suddenly taken from her husband and three young children. Yet another mother of three and one of her children were tragically ripped from their devastated family. A father and daughter, known for their special bond and love of the game, would never play again. The experienced pilot, who was known for his skill and kindness, couldn’t have known it would be his last flight.

Every one of the nine victims of the tragic crash was loved, and their deaths impacted those who knew them, and many others who didn’t. 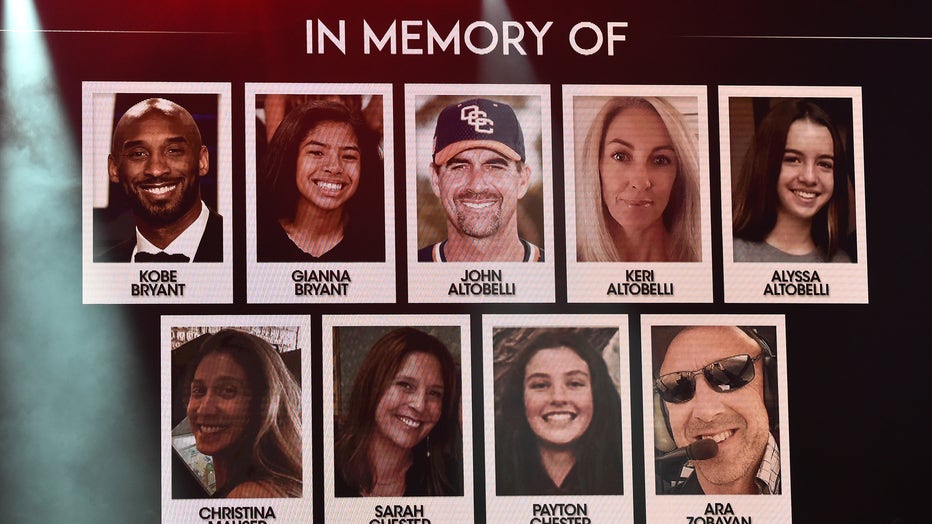 FILE: A view of the screen during a tribute to victims of the helicopter crash that killed Kobe Bryant during the BET Super Bowl Gospel Celebration at the James L. Knight Center on January 30, 2020 in Miami, Florida. (Photo by Aaron J. Thornton/Getty Images for BET)

John Altobelli, 56, served as a veteran baseball coach for Orange Coast College in Costa Mesa. In addition to his passion for the game, John was known for his sense of humor and devotion to his friends.

“The same qualities and character that guided John as a teacher on the field... was the same as a friend ... loyalty, trust, respect, work ethic and love,” said Clark Smith, John’s  best friend. “Those are powerful words, but Alto backed them up every day.”

Keri Altobelli, 46, was regarded for her passion, loyalty, outspokenness, love for her family, and infectious laugh. She was married to John, and was mother of Alyssa.

"[She] was the closest person in my life... She was courageous, hardworking, caring, a friend, sister, and mother," Derek Sanders, Keri’s brother, said, calling his sister a "force."

A public memorial was held for the Altobelli family at Angel Stadium in Anaheim, Calif. on Feb. 10.

RELATED: Memorial held for Altobelli family, who died in crash with Kobe Bryant, at Angel Stadium

Christina Mauser, 38, was a mother of three. She was regarded as the top assistant coach for Bryant’s Mambas youth basketball team. She previously worked as a teacher and was the manager of her husband Matt Mauser’s two local bands.

Friends of Christina remember her for her “infectious smile and laugh,” and ability to bring out the best in everyone. On Feb. 16, a celebration of life service was held for Mauser at Edison High School, the same place where she and her husband went to school.

Ara Zobayan, 50, was a helicopter pilot and the individual flying the aircraft that crashed in Calabasas, Calif. He was the chief pilot for Island Express Helicopters, having logged over 8,200 hours of flight time.

Those who flew with Zobayan remembered him for his smile, friendship, and a magic soul.

Zobayan’s passion for helicopters began when he took a flight above the Grand Canyon as a teenager. “It tapped into what he felt he was here on Earth to do: to fly and to teach, and to teach people to have this feeling that he had,” said an emotional Darren Kemp, a student pilot of Zobayan who became a close friend.

Sarah Chester, 45, was a mother of three, wife and former teacher. She stopped teaching at the Tustin Memorial Academy in Santa Ana, Calif. to dedicate more time to her family, the Los Angeles Times reported.  Chester was also a former college athlete who played volleyball at Whittier College.

“Sarah was full of life and the glue of our family,” the Chester family said in a statement. “She was a tireless force in support of her family. The love we feel from so many today is a testament to the community she created for us.”

Payton Chester, 13, was a member of the Mamba Sports Academy basketball team. She was described as a skilled player who was always kind. Payton was enrolled in the eighth grade at St. Margaret’s Episcopal School in San Juan Capistrano, Calif.

“Payton was one of those kids that everyone was drawn to because she was so genuinely kind,” Todd Schmidt, a family friend and principal at Harbor View Elementary School in Newport Beach, where previously Payton attended, told PEOPLE.  “She went out of her way to make sure people felt comfortable. She would seek out that kiddo who was alone and include them.

*Kobe Bryant, 41, was an NBA legend who played for the Los Angeles Lakers for his entire 20-season professional basketball career. Bryant entered the league fresh out of high school in 1996 and retired in 2016. He won five championships and was awarded two Olympic gold medals. Off the court, Bryant was a husband, father, film producer, entrepreneur, coach and mentor.

Gianna, 13, better known as “Gigi,” was Bryant’s second oldest daughter. She had developed a passion for basketball and wanted to keep her dad’s basketball legacy alive by playing in the WNBA someday.

“We are completely devastated by the sudden loss of my adoring husband, Kobe — the amazing father of our children; and my beautiful, sweet Gianna — a loving, thoughtful, and wonderful daughter, and amazing sister to Natalia, Bianka, and Capri,” Vanessa Bryant said on Instagram after the crash.