RIVERSIDE, Calif. - As a man who was wanted in connection to a murder led authorities on a lengthy chase across SoCal, a big rig truck driver decided to take action Tuesday night.

The big rig truck driver, Ahmed Shabaan, said he tried to end the dangerous pursuit by blocking the pickup truck's path. Shabaan said he knew a murder suspect was involved in the chase so he tracked the driver, lined the big rig truck so the suspect's pickup truck would smash into the massive vehicle near an intersection in the Pomona area.

"I just thought to get him off the street," Shabaan explained. "If I didn't, and [officers] have been behind him for that long and didn't stop him... I have the power." 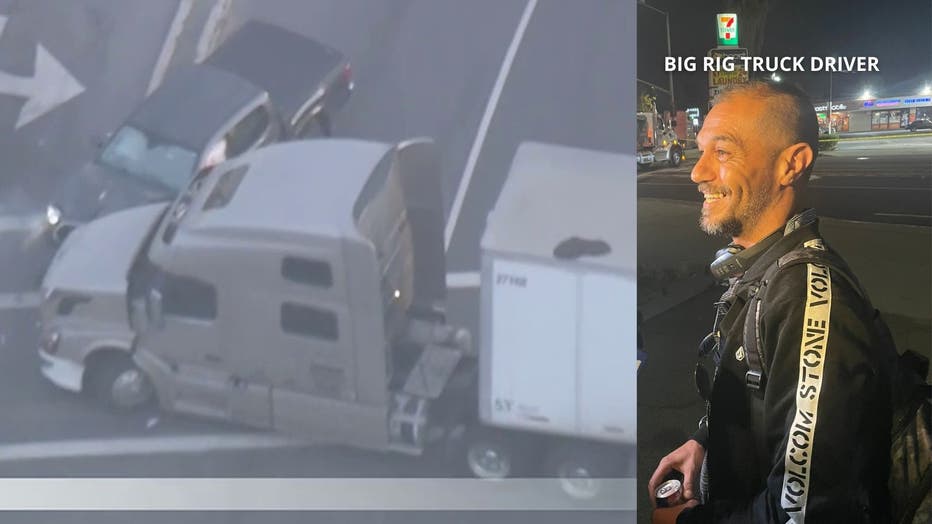 Earlier in the day, the Riverside County Sheriff's Department had been searching for the murder suspect in the area. When deputies tried to contact the suspect, the suspect attacked one of the deputies then drove off in a pickup truck, prompting a pursuit.

The suspect then led authorities on a chase across Riverside County, then to the East San Gabriel area. The suspect was seen reaching speeds of over 90 mph while blazing through the 60 Freeway.

A high-speed chase is underway in the Riverside area Tuesday evening.

A woman who was the passenger in a lengthy chase across SoCal was let go by authorities and spoke candidly with FOX 11's Bill Melugin. The driver of the pickup truck involved in the chase was wanted for murder.

The suspect vehicle eventually crashed into the big rig truck. The driver of the pickup truck was taken into custody and the passenger was briefly interviewed by deputies before letting her go.

The passenger, who identified herself as "Roxy," said she had no idea the driver -- who is her friend from Bakersfield -- was wanted for murder.

"We were hanging out and he said he wanted to help his friend in LA," Roxy said. "I said, 'I am down to roll. It's all good. We'll go help your friend.'"

The driver was taken to the hospital while in custody. Both Roxy and Shabaan were OK after the crash.

Officials did not specify which murder case the suspect may be linked to.