LOS ANGELES - Two forces — a bomb cyclone and atmospheric river — will come together to deliver heavy rain to the West Coast this weekend.

And, according to the National Weather Service, it is common for both systems to occur simultaneously.

"That is because when you have a low pressure system that deep, like this one that will be Vancouver Island and southwest British Columbia Sunday night, because of the strong pressure gradient, you're also going to get quite a bit of wind out ahead of the system, in this case, a strong southwesterly wind into northern California," lead forecaster with the Weather Prediction Center, Brian Hurley, said.

What are the main threats?

By Saturday night, the Pacific cyclone will rapidly intensify and will direct the powerful atmospheric river squarely at the West Coast, bringing subtropical moisture to California. 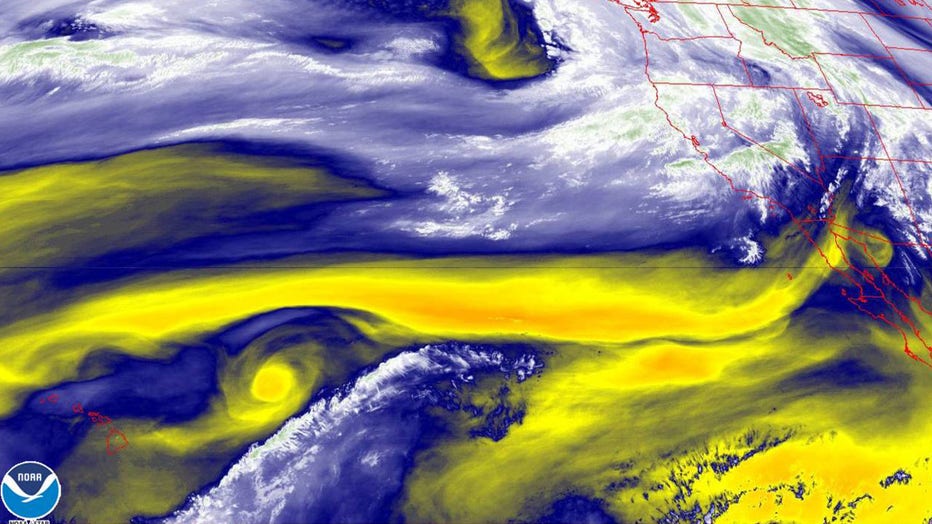 The main impacts associated with the cyclone and atmospheric river will be strong winds and heavy rainfall, occurring mainly Sunday through Sunday evening.

Winds will average 25 to 40 mph, with gusts as high as 60-65 mph across southwest Oregon into northern California, and from the coastal areas to the western slopes of the Cascades and Sierra.

Rainfall will average between 3-6 inches, with some isolated areas likely to see locally higher totals.

"In terms of the rainfall, rainfall rates of a half-inch to one inch or greater per hour are expected to move into northern California by early Sunday morning, then shift slowly southward into central CA later Sunday and Sunday night," Hurley continued. "This will pose a flash flood threat, especially over burn scar areas that were ravaged by recent fires."

This has prompted the National Weather Service to issue flash flood watches for some areas.

Hurley noted the other threat of high elevation snowfall Sunday and Sunday night. Snowfall totals between 1-2 feet are expected over higher elevations of the Sierra, with the potential for localized amounts up to three feet.

The Storm Prediction Center has issued a level 1 out of 5 risk for severe storms Sunday afternoon and evening for the Oregon coast, as of Friday evening.

What are a ‘bomb cyclone’ and ‘atmospheric river’?

A bomb cyclone occurs when a mid-latitude cyclone rapidly intensifies, dropping at least 24 millibars over 24 hours.

Meanwhile, atmospheric rivers are relatively long, narrow regions in the atmosphere – like rivers in the sky – that transport most of the water vapor outside of the tropics.

RELATED: The science behind an atmospheric river and the precipitation it will bring

"These columns of vapor move with the weather, carrying an amount of water vapor roughly equivalent to the average flow of water at the mouth of the Mississippi River," Hurley said. "When the atmospheric rivers make landfall, they often release this water vapor in the form of rain or snow."