A cellist paid tribute to victims of a mass shooting this week in Colorado by playing outside of the King Soopers grocery store Tuesday.

BOULDER, Colo. - A cellist paid tribute to victims of a mass shooting this week in Colorado by playing outside of the King Soopers grocery store Tuesday.

In a video uploaded to Instagram, an unknown cellist plays across the street from King Soopers as mourners gathered to place flowers at the foot of the fence surrounding the store’s parking lot.

Hundreds of people paid their respects at the growing makeshift memorial near the supermarket, adorning it with wreaths, candles, banners reading "#Boulderstrong" and 10 crosses with blue hearts and the victims’ names. 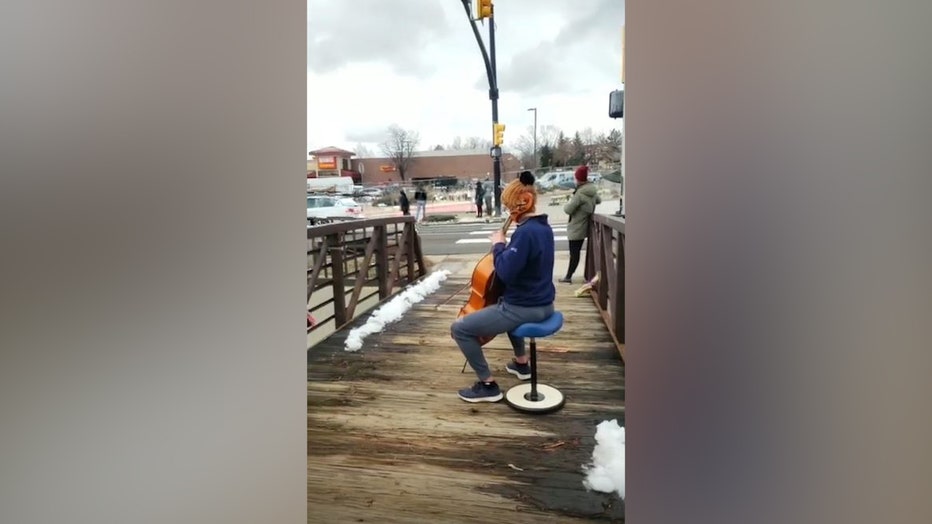 Freeze frame of video that captured cellist playing outside grocery store where 10 people were killed. (dylandorveecreations via Storyful)

Who were the victims of the Boulder King Soopers shooting?

Several community vigils were planned to honor the victims who died on March 22. The Boulder Police Department invited the public to show support for Officer Eric Talley, who was killed, by witnessing a police procession Wednesday as his body was taken from the coroner’s office to a funeral home in the Denver suburb of Aurora.

Talley had been with Boulder police since 2010. He was the first to arrive after responding to a call about shots fired and someone carrying a rifle, officials said.

"He was by all accounts one of the outstanding officers of the Boulder Police Department, and his life was cut too short," Boulder County District Attorney Michael Dougherty said during a press conference.

Leiker, Olds and Stong worked at the supermarket, a former co-worker said.

Mahoney’s daughter, Erika, called her father a "hero" and said he represented "all things love."

"I'm so thankful he could walk me down the aisle last summer," she wrote on Twitter with an image of the two on her wedding day. "I love you forever Dad. You are always with me."

RELATED: Boulder gunman's sister-in-law upset he was 'playing' with gun, took it away two days before rampage, cops say

Who is the suspect in the King Soopers shooting?

Police on Tuesday identified a 21-year-old man as the suspect in the mass shooting named Ahmad Al Aliwi Alissa from Arvada, Colorado. Officials said he had lived most of his life in the U.S.Investigators don’t know yet why the suspect opened fire inside the grocery store. Boulder County District Attorney Michael Dougherty said the investigation is in the early stages but that detectives believe the suspect was the only shooter.

The attack was the seventh mass killing this year in the U.S., following the March 16 shooting that left eight people dead at three Atlanta-area massage businesses, according to a database compiled by The Associated Press, USA Today and Northeastern University.

The Associated Press and Storyful contributed to this report.