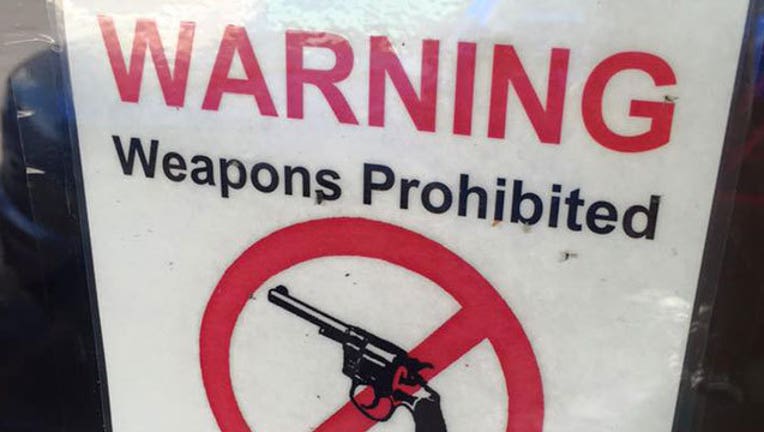 As a response to last week's Chattanooga shooting, Brenham residents are taking up arms to guard their local military recruitment center.
They are hoping other cities will join in on the movement.

Warning - weapons prohibited; it's the first thing you see when walking up to the Marine Corps Recruiting Office in Brenham.

"It's just going to get worse. These guys need to be able to protect themselves," says John Deans, Arm Our Eagles.

Now many want that rule overturned, like John Deans who helped create a group called Arm Our Eagles.

On Wednesday, Arm Our Eagles will come prepared with their concealed handguns. The group will be walking up and down this block, making sure they protect those who are protecting us. This comes one week after the attacks on a military recruiting office and Navy-Marine operations center in Chattanooga, Tennessee. Five servicemen were killed.

"Vast odds are, nothing is going to happen here. But who thought that would happen in Chattanooga, Tennessee less than a week ago? Or Little Rock, Arkansas or Fort Hood?" says Deans.

A long-standing rule prohibits guns from being carried at recruitment centers. There are also some gun restrictions on military bases. It's something that Elroy Dannhaus isn't happy with. He has owned Otto's Barber Shop for 51 years and it sits right across the street from the Marine Corps Recruiting Office in Brenham. Nowadays, Dannhaus is keeping his guard up, especially after the recent attacks.

"That's the first thing that hit my mind, it could happen right here in Brenham. I'd be out the back door," says Elroy Dannhaus, Otto's Barber Shop.

Seven states, including Texas, have ordered National Guard members to be armed.
Deans says we're headed in the right direction.

On the other hand, the Marine Corps Recruiting Office in Brenham gave us a statement saying:
"While we greatly appreciate the support of the American public during this tragedy, we ask that citizens do not stand guard at our recruiting offices. Our continued public trust lies among our trained first responders for the safety of the communities where we live and work."

The Army Chief of Staff told FOX News that the Army is in fact considering whether to arm recruiters, if the legal restrictions are lifted.