Wildfires predominantly centered in the US west had burned some 1.29 million acres (2,021 square miles) in 13 states, federal authorities reported on July 20, with the smoke spreading across the country. (Credit: National Weather Service via Storyful)

LOS ANGELES - July’s full moon will peak this week and appear full for several days into the weekend — though it may have a reddish-orange glow due to rampant wildfires burning in the American West.

The full moon this month is known as the "buck moon," and got its name from the Algonquin tribes living in the present-day northeastern U.S., according to the Farmer’s Almanac. The name reflects the time of year when summer peaks and velvety antlers of male deer typically begin to appear.

Some other nicknames include the "hay moon," as high summer is the time for farmers to cut and cure hay for winter feed or the "thunder moon" because of summer’s frequent thunderstorms.

For Hindus, Buddhists and Jains, this moon is known as the "guru full moon" (Guru Purnima), celebrated as a time for clearing the mind and honoring the guru or spiritual master, according to NASA.

When to watch the July 2021 full buck moon

July’s full moon will peak for people in the Americas at 10:37 p.m. ET on Friday, July 23, 2021, NASA says. Those interested in catching a glimpse should look southeast to watch it rise above the horizon. 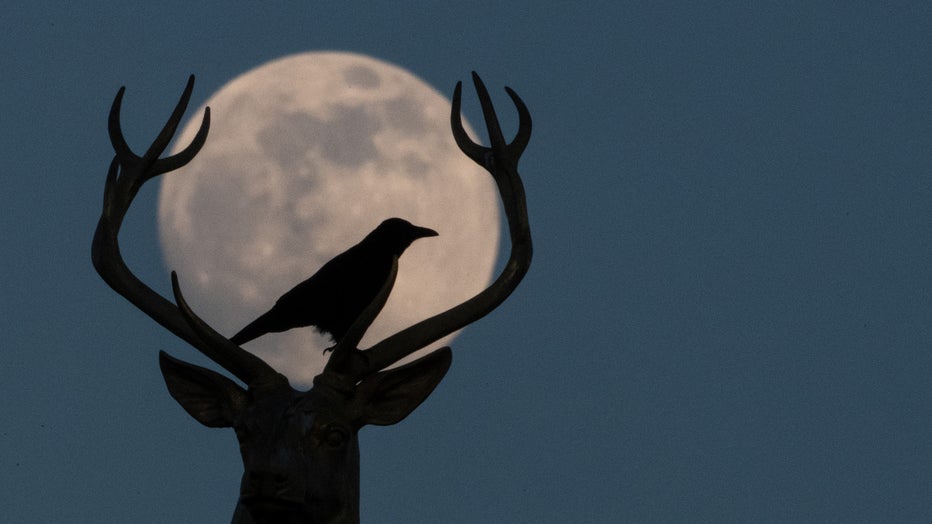 A crow sits on the golden stag of the sculptor Ludwig Habich on the roof of the art building at the Schloßplatz in front of the almost full moon. (Photo by Sebastian Gollnow/picture alliance via Getty Images)

The moon will appear full for about three days around the peak, starting on Thursday evening through Sunday morning.

NASA added that those in Newfoundland and Greenland eastward to the International Dateline won’t see the peak illumination until July 24, 2021.

Why could the full moon have a reddish glow?

There are currently wildfires burning across 13 western states, including one in Oregon that's currently the largest in the U.S., all of which are creating hazy skies on the opposite coast.

Oregon's Bootleg Fire grew to 616 square miles — half the size of Rhode Island. The smoke can spread thousands of miles downwind from some of the wildfires, which left New York City skies hazy on Tuesday.

"Due to the fact that smoke particles are small and light, they can be transported hundreds if not a few thousand miles away from their source," AccuWeather Meteorologist Alex DaSilva explained in a post.

"While the smoke is not always thick enough to obstruct surface visibility, it is thick enough to create poor air quality in some areas and allow for vibrant sunrises and sunsets," DaSilva added.

Some have shared pictures of the moon on social media this week appearing to have the reddish-orange glow.