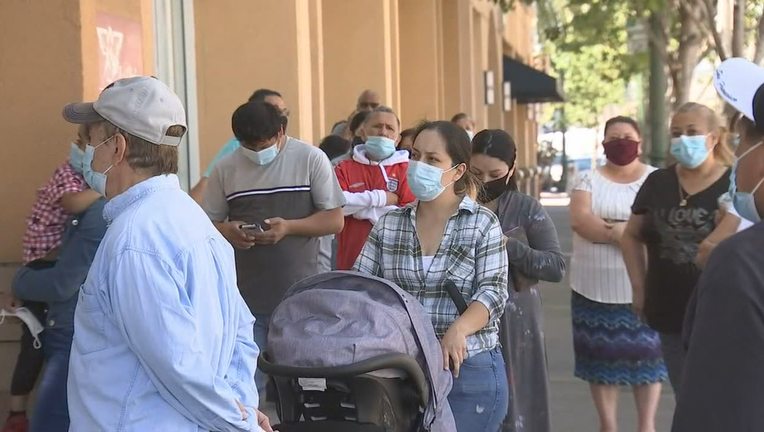 The Latinx community in Oakland's Fruitvale district have been disproportionately affected by coronavirus.

SACRAMENTO, Calif. - Near the end of September, with coronavirus cases falling and more schools and businesses reopening, Gov. Gavin Newsom’s administration urged restraint, citing a statistical model that predicted a startling 89% increase in virus hospitalizations in the next month.

That hasn’t happened. Instead, state data shows hospitalizations have fallen by about 15% since that warning while the weekly average number of new cases continues to decline even as other more populous states like Florida, Ohio and Illinois see increases.

California’s good news isn’t enough to change what Newsom calls his “slow” and “stubborn” approach to reopening the world’s fifth-largest economy. He again cautioned people against “being overly exuberant” about those coronavirus numbers, pointing to a “decline in the rate of decline” of hospitalizations.

While California’s 14-day average of hospitalizations is down, the 7-day average is up ever so slightly to 2,241 patients. The number peaked in July at more than 7,100.

“Boy, what more of a reminder do you need than seeing these numbers begin to plateau?” Newsom said Monday during his weekly news conference.

But Brad Pollock, associate dean of public health sciences at the University of California, Davis, School of Medicine, said this shows models that try to predict how the coronavirus will behave are “not that great.”

“We don’t have a model that accurately predicts what’s going to happen next,” he said.

Collectively, people 18 to 49 now account for 58% of all new coronavirus cases in the county.

“If you were to add teenagers in the mix — these are oftentimes young people who may be out socializing — individuals between the ages of 12 and 50 account for fully 68%,” she said.

Newsom’s go-slow approach has frustrated the state’s tourism industry, which is trying to recover after seven months of shutdown. As of last week, the state has lifted its most severe restrictions on all but 10 of the state’s 58 counties, with another update scheduled for Tuesday.

Earlier this month, the Newsom administration for the first time said it was OK for up to three households to gather but only if it is outdoors and people remain socially distanced.

But Newsom still has not allowed for large public gatherings or theme parks to reopen, even with modifications. The Walt Disney Co. has criticized the state for delaying reopening rules for theme parks, saying it contributed to the company’s decision to lay off 28,000 workers at its parks in California and Florida.

Even the unions representing Disney employees have changed their stance, sending Newsom a letter on Monday urging him to allow theme parks to reopen. The unions, representing about 10,000 Disneyland workers, told Newsom in June it was unsafe to open theme parks. But they now say Disney has a testing program and measures in place for personal protective equipment and ventilation.

“We are confident that with these protocols set in place, Disneyland will be able to fully reopen safely,” said Andrea Zinder, president of UFCW 324.

Newsom said he plans to announce guidelines for theme parks on Tuesday, hinting he might have different rules for different types of theme parks.

“I hope one recognizes our stubbornness on a health-first, data driven decision making process is done with our eyes wide open on what’s happening now around the world,” Newsom said. “We have to maintain that vigilance so we can avoid any further increase in transmission.”

Much of the U.S. is seeing an uptick in coronavirus cases and hospitalizations, with the Midwest seeing some of the worst spikes. The Northeast was the hardest hit in the spring, and the tri-state region of New York, Connecticut and New Jersey instituted rules requiring travelers from states with a high-rate of coronavirus spread to quarantine for two weeks upon entering.

Monday, Newsom said he was not considering similar rules for travelers to California. But he added: “We always maintain an openness to those considerations.”

“We have done better than other states,” Newsom said, adding the percentage of positive tests in California for the coronavirus has never exceeded 8%. The most recent weekly rate is 2.4%.

“We had to be tough and we’ve had to be vigilant and we had to be mindful of the changing dynamics of this pandemic,” he said.