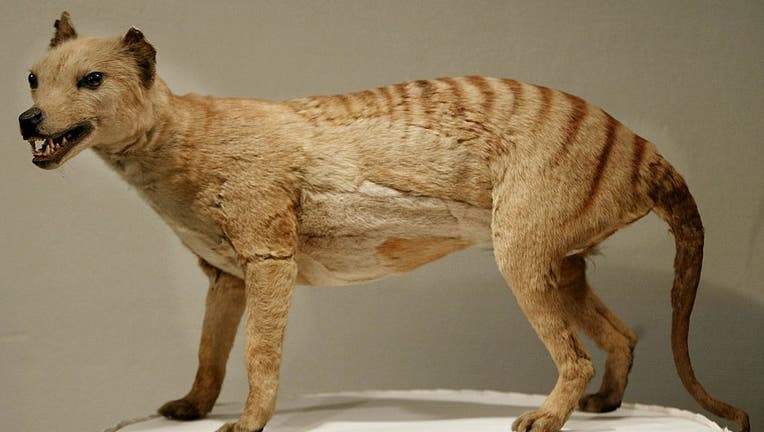 SYDNEY, AUSTRALIA: A Tasmanian tiger (Thylacine), which was declared extinct in 1936, is displayed at the Australian Museum in Sydney, 25 May 2002. Professor Mike Archer has led a team of scientists who have successfully replicated DNA from a 130-yea

DALLAS - A team of scientists said it has started the de-extinction process of the thylacine, or the Tasmanian tiger, after it was eradicated by human hunting nearly 100 years ago.

Dallas-based Colossal Biosciences, a genetic engineering and de-extinction company, said the animal was native to Australia and had roamed the Earth for millions of years.

The Tasmanian tiger, a striped marsupial carnivore, was thought to have gone extinct after Benjamin, believed to be the last member of the species, died in captivity in the Hobart Zoo in Australia in September 1936.

The company said it will use gene editing— changing the DNA of a living organism— to bring the Tasmanian tiger back to life. They further hope to use advanced technology to preserve the species.

The company said bringing the thylacine will help re-balance the Tasmanian and broader Australian ecosystems. Scientists said the ecosystems have degraded since the tiger went extinct, which led to the spreading of diseases and an increase in wildfires and invasive species. They claim the thylacine hunted and killed non-native predators that fed off of plants and trees critically needed to sustain natural vegetation.

A street in Nowra, New South Wales, was invaded by a huge flock of cockatoos on April 27. Credit - Sherif Saraya via Storyful

Colossal is working with multiple universities to help bring back the Tasmanian tiger.

"We’re thrilled to be collaborating with Andrew Pask and the University of Melbourne to restore this amazing animal to Earth while also further developing gestational and genetic rescue technologies for future marsupial conservation efforts," Ben Lamm, Colossal Co-Founder and CEO, said in a news release.

"Our family remains dedicated to supporting conservationist efforts around the world and protecting Australia's biodiversity is a high priority. The Tassie Tiger’s extinction had a devastating effect on our ecosystem and we are thrilled to support the revolutionary conservation efforts that are being made by Dr. Pask and the entire Colossal team," Chris Hemsworth said.

The Colossal team is also working to de-extinct the woolly mammoth and restore the species to the Arctic Tundra.