Norris, an American icon known for starring roles in popular action films and television, first studied martial arts in Korea in the 1950s while serving in the U.S. Air Force, according to Biography.com. When he returned home, he opened a karate studio and later tried his hand at acting — appearing with Bruce Lee in the 1972 film "Way of the Dragon." 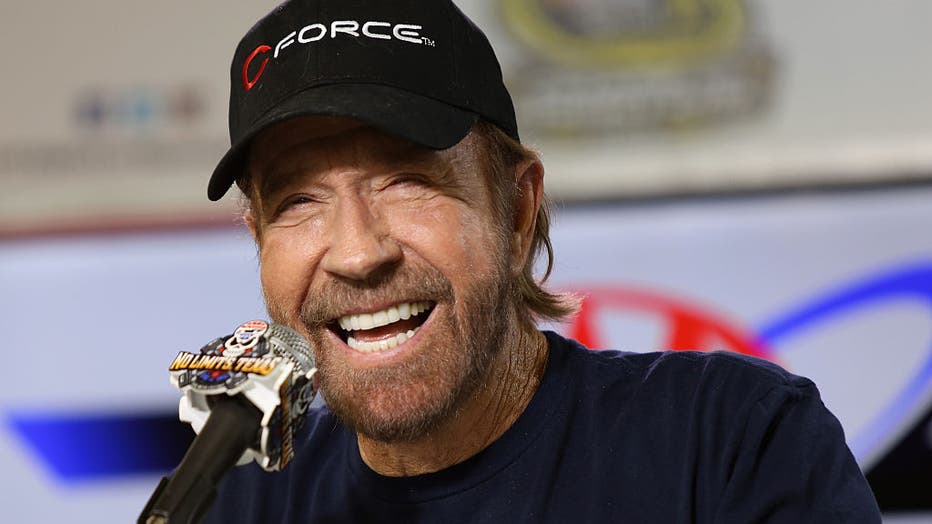 FILE - Actor Chuck Norris speaks with the media during a press conference prior to the NASCAR Sprint Cup Series AAA Texas 500 at Texas Motor Speedway on Nov. 6, 2016 in Fort Worth, Texas. (Photo by Jerry Markland/Getty Images)

Outside of Hollywood, Norris has become an occasional internet meme — finding himself at the center of popular jokes attributing superhuman strength and impossible feats to him. As one online joke goes, "Chuck Norris doesn't blow out birthday candles, he stares at them until they extinguish themselves!"

He’s also known as a conservative Christian and has campaigned for top Republicans throughout the years. Though he was born in Oklahoma, the Texas Senate named Norris an honorary Texan in 2017.

To celebrate his 81st birthday, fans can watch any of these free and on-demand films and documentaries on Tubi that feature Norris and some of his great fight scenes.

Breaker! Breaker! (1977) - "A martial-arts trucker looks for his brother in a small redneck town run by a judge who has an illegal speed trap to capture unaware travelers."

Good Guys Wear Black (1977) - "An ex-US Army commando must find the reason why his comrades from his unit are being systematically murdered before he is next."

A Force of One (1979) - "When an assassin targets members of an undercover narcotics investigation, the police enlist the help of a karate champion to take the killer down."

Silent Rage (1982) - "It’s up to a small town Texas sheriff to stop a mute maniacal murderer who has the ability to self-heal, and only wants to destroy life."

Lone Wolf McQuade (1983) - "After his daughter is kidnapped for witnessing a hijacking, a Texas Ranger and former Marine enters a deadly fight with an arms dealer to save her."

Code of Silence (1985) - "A karate cop takes on a corrupt department and two feuding crime families. He has the chops to do it."

Invasion U.S.A. (1985) - "A patriotic martial arts master comes out of retirement to wage battle against a legion of Soviet mercenaries who have invaded the United States."

Chuck Norris: Karate Kommandos (1986) - "The famed Martial arts master is animated in this exciting series, where he plays a U.S. government agent who must fight an evil organization."

Hero and the Terror (1988) - "Chuck Norris ('Missing in Action') stars as homicide detective Danny O'Brien, known simply as 'Hero' for having brought down L.A.'s most vicious serial killer known as 'The Terror' (Jack O'Halloran, 'Farewell My Lovely'). But for years, O'Brien has secretly been haunted by the fact that his capture of The Terror was a fluke. When the murderer escapes from jail and returns to his old ways, O'Brien gets the chance to earn his glorified reputation...if his enemy doesn't destroy him first!"

Braddock: Missing in Action III (1988) - "Chuck Connors returns as the iconic Vietnam vet Col. James Braddock who returns to Vietnam to free his wife and son who he had thought were dead."

The Hollywood Collection: Steve McQueen, Man on the Edge (1990) - "Before he was a leading man, he was a young boy abandoned by his father, and later a Marine. This is the story of a movie star who changed the game."

Top Dog (1995) - "Maverick cop, Jake Wilder, is convinced his career is in jeopardy when he meets his new partner: a mischievous, high-I.Q. canine named Reno."

The Cutter (2006) - "After a kidnapping rescue goes fatally awry, a shamed detective tries to save an old diamond cutter, once interned at Auschwitz, from a savage thief."

Bruce Lee: A Warrior's Journey (2016) - "A look at the remarkable life of martial arts legend Bruce Lee and his philosophy of Jeet Kune Do presents new insights and never-before-seen footage."