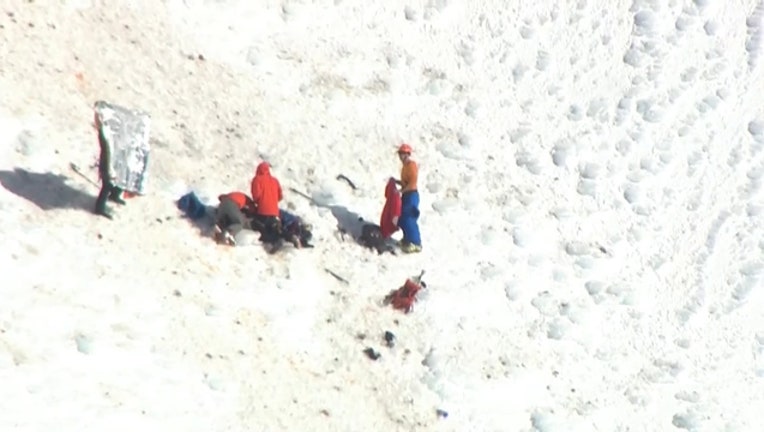 Authorities said the injured climber fell up to 1,000 feet (304 meters) on a sunny, relatively warm day that melted snow and made climbing treacherous.

KOIN-TV reported that video taken from a helicopter showed other climbers performing CPR on the injured man, whose name has not been released.

Separately, a party of four climbers is stranded and one of them is hurt, said Sgt. Brian Jensen, a sheriff's office spokesman. Other climbers were on the mountain Tuesday afternoon, but it's unknown if they are in trouble.

Jensen said it's imperative to get the stranded climbers off the mountain because a winter storm is expected early Wednesday.

The stuck climbers were on the Hogsback area near the summit of the 11,240-foot (3,429-meter) mountain east of Portland.

Air Force Maj. Chris Bernard of the 304th Rescue Squadron said climbers reported from their cell phones that conditions were deteriorating, with rocks and ice falling.

"The quote was it was `like a bowling alley,"' he said.

Wyatt Peck, 26, said he started to go up the mountain Tuesday, but turned around. He said the conditions were so treacherous that he and a friend could not get their pickaxes and crampons into the snow that was melting from a hard freeze overnight.

Peck said others in his climbing group continued, and he's concerned that they are among those stranded.

Mount Hood is a popular climbing site that has seen dozens of accidents and fatalities over the years. Thousands climb it each year, mostly in the spring.

The peak is notorious for loose ice and rocks in warm weather.

The sun has been out this week and the temperature was around freezing at the spot where the climber fell, said Russell Gubele of Mountain Wave Search and Rescue.

"This is the kind of weather conditions and the time of year where you often get falling ice, falling rocks and problems," Gubele said. "It sounds like the conditions up there are very unsafe right now."