According to an August survey conducted by the U.S. Centers for Disease Control and Prevention, 40% of Americans are struggling with mental health or substance abuse issues as the coronavirus pandemic continues.

LOS ANGELES - From exhausted health care workers to those affected by sudden unemployment and isolation, recent reports show a rise in anxiety and depression among Americans during the coronavirus pandemic.

According to an August survey conducted by the U.S. Centers for Disease Control and Prevention, 40% of Americans are struggling with mental health or substance abuse issues as the COVID-19 pandemic continues.

Depression on the rise in 2020

“I think this year in particular has really brought people face to face with so much that they may have not dealt with in the past,” Dr. Isaiah Pickens, a licensed clinical psychologist and CEO of iOpening Enterprises, said.

Pickens noted 2020 has been really difficult for many people and for many reasons.

“One of the main reasons we’ve seen the difficulty is the amount of loss people have experienced — not just loss of economic opportunity through jobs, but loss of life with friends and family who might be impacted by COVID-19, but also a loss of sense of having control with the racial injustice refocus and so many issues happening around the country. People have had an increased sense of anxiety that has really impacted them in so many different ways,” Pickens said.

According to the CDC, during June 24-30, U.S adults reported considerably elevated adverse mental health conditions associated with COVID-19, and symptoms of anxiety disorder and depressive disorder increased considerably in the United States during April–June of 2020, compared with the same period in 2019.

Pickens noted that a wide spectrum of feelings and emotions exist among Americans.

“On of the myths of mental health is that you’re depressed or you’re not. You’re anxious or you’re not. I think all of it is on a spectrum,” Pickens pointed out.

However, there are other individuals on the spectrum, Pickens said, who feel like they have had a rough couple of weeks or months, where they just don’t feel like themselves. Pickens noted that many more Americans are working from home during the pandemic, but for some people that doesn’t mean a decreased workload. “For some people, it increases the workload while having to balance other responsibilities like your spouse, your kids, or whatever it may be,” Picked added.

“Regardless of which space that you’re in, I do think it’s important to do frequent check-ins to see where you are emotionally to see what’s triggering you, because that partially gives you insight into where you are on the mental health spectrum at any given moment,” Pickens suggested.

According to the CDC report, The percentage of respondents who reported having seriously considered suicide 30 days before completing the survey was 10.7%, and was significantly higher among younger participants aged 18-24.

Pickens cited social media as one factor that has caused depression among younger adults. “Social media has provided the opportunity to connect virtually, but at the same time it has created spaces where young people feel disconnected in meaningful ways from others.”

Picked said social media also has presented the opportunity for individuals “to compare themselves to other people’s life experience in ways that aren’t always realistic.”

Higher suicidality rates were found among Black and Brown population

The U.S. Census Bureau launched A CDC Household Pulse Survey to obtain data on the social and economic impacts of the coronavirus pandemic on Americans. But the findings suggested that recent demonstrations and debate over systemic racism disproportionately impacted the mental health of Black Americans, compared to other races.

Pickens said the higher rates of suicidality among the Black and Brown population is tremendously concerning. “What we see among many minority communities that are dealing with low socioeconomic status is a limited opportunity for access to resources that can help them deal with a lot of risk factors related to suicide.”

Pickens noted the challenges people face connecting with resources in the community that would actually protect them from the impact of suicide but are currently not accessible during the coronavirus pandemic due to social distancing measures in place.

“It is worrying that people are in so much pain that they feel like the best solution is to end their life,” Pickens said.

George Floyd was a Black man killed during an arrest after a store clerk alleged he had passed a counterfeit bill in Minneapolis. A white police officer, Derek Chauvin, knelt on Floyd’s neck for a reported 8 minutes and 46 seconds.

Suicides are rapidly increasing in the United States

40.9% of people who took the CDC survey reported at least one adverse mental or behavioral health condition, including symptoms of anxiety disorder or depressive disorder (30.9%), symptoms of a trauma- and stressor-related disorder related to the pandemic (26.3%), and having started or increased substance use to cope with stress or emotions related to COVID-19 (13.3%). 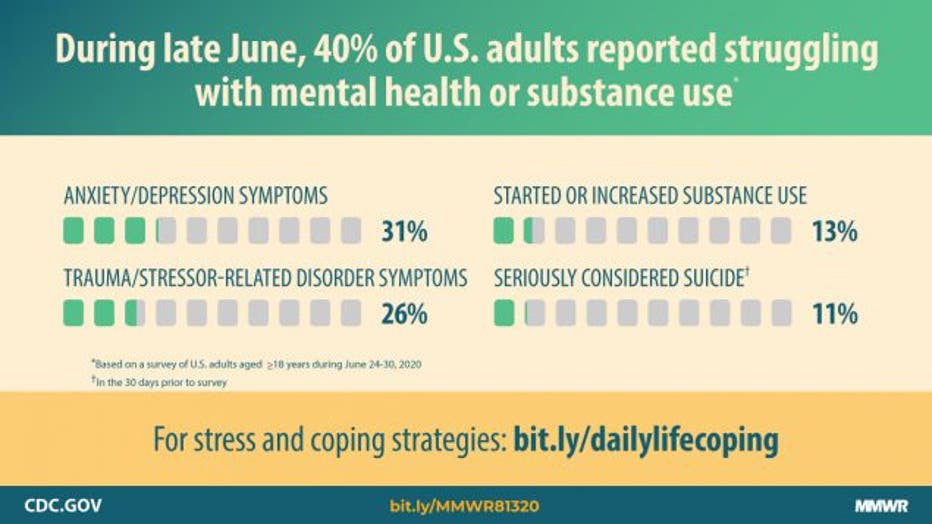 Statistic from survey titled "Mental Health, Substance Use, and Suicidal Ideation During the COVID-19 Pandemic" (CDC.GOV)

Suicides are rapidly increasing in the United States, a 35% increase from 1999-2018, and the mental health crisis has been fueled by the COVID-19 pandemic. Pickens said the need to reach and treat the rapidly growing number of at-risk individuals is urgent.

The pandemic can also bring people together

While the crisis has boosted depression, the pandemic has also drawn people together through a shared experience in ways to help them talk more openly about negative feelings.

“People are more freely talking about engaging in therapists, freely talking about the pain they may experience from depression or anxiety,” Pickens said. “Talking about suicide can actually lower the risk of self-harm. Expressing your honest emotions to others can enable you to confront your fears, and realize that you are not alone.”

Helpful tools to deal with anxiety

“Be disciplined about your well being,” Pickens emphasized.

Pickens also recommends tapping into what we experience in the body. He suggests practicing mindfulness by taking time to take deep breaths. Pickens also cited the importance of giving yourself compassion.

“I believe that when people ask people today, how are you doing? I think they really mean it. They actually want to hear how you’re doing, because there’s been such calamity and tragedy in this year that everyone knows that our mental health and our emotional well being has been impacted,” Pickens said. “So, it’s given people space hopefully to take what other people are doing and saying ‘how are you doing’ for us to turn it inward and say it to ourselves ‘how are you doing’ and really have compassion in that moment.”

Data from a U.S. Census Bureau survey indicates a rise in anxiety and depression among black Americans following the death of George Floyd.

The Free Minds Festival, a first-ever virtual reality festival and organized by Pickens, is scheduled to help business leaders and employees focus on mental health and workplace isolation. The festival will feature mental health professionals, along with musical artists who will perform and also talk about their fears and feelings of vulnerability.

National Suicide Prevention Awareness Week runs through Sept. 12, and the Free Minds Festival will be held online on Friday, Sept. 25.