Seattle Public Schools teachers voted to suspend their strike after the district and striking teachers reached a tentative agreement. School will start for students and staff on Wednesday, Sept. 14, a week after teachers with Seattle Education Association voted to strike.

WASHINGTON (AP) - As Republicans and Democrats fight for control of Congress this fall, a growing number of conservative political action groups are targeting their efforts closer to home: at local school boards.

Their aim is to gain control of more school systems and push back against what they see as a liberal tide in public education classrooms, libraries, sports fields, even building plans.

Once seen as sleepy affairs with little interest outside their communities, school board elections started to heat up last year as parents aired frustrations with pandemic policies. As those issues fade, right-leaning groups are spending millions on candidates who promise to scale back teachings on race and sexuality, remove offending books from libraries and nix plans for gender-neutral bathrooms or transgender-inclusive sports teams.

Democrats have countered with their own campaigns portraying Republicans as extremists who want to ban books and rewrite history.

At the center of the conservative effort is the 1776 Project PAC, which formed last year to push back against the New York Times' 1619 Project, which provides free lesson plans that center U.S. history around slavery and its lasting impacts. Last fall and this spring, the 1776 group succeeded in elevating conservative majorities to office in dozens of school districts across the U.S., propelling candidates who have gone on to fire superintendents and enact sweeping "bills of rights" for parents.

In the wake of recent victories in Texas and Pennsylvania — and having spent $2 million between April 2021 and this August, according to campaign finance filings — the group is campaigning for dozens of candidates this fall. It's supporting candidates in Maryland's Frederick and Carroll counties, in Bentonville, Arkansas, and 20 candidates across southern Michigan.

Its candidates have won not only in deeply red locales but also in districts near liberal strongholds, including Philadelphia and Minneapolis. And after this November, the group hopes to expand further.

"Places we’re not supposed to typically win, we’ve won in," said Ryan Girdusky, founder of the group. "I think we can do it again."

In Florida, recent school board races saw an influx of attention — and money — from conservative groups, including some that had never gotten involved in school races.

The American Principles Project, a Washington think tank, put a combined $25,000 behind four candidates for the Polk County board. The group made its first foray into school boards at the behest of local activists, its leader said, and it’s weighing whether to continue elsewhere. The group’s fundraising average surged from under $50,000 the year before the pandemic to about $2 million now.

"We lean heavily into retaking federal power," said Terry Schilling, the think tank’s president. "But if you don’t also take over the local school boards, you’re not going to have local allies there to actually reverse the policies that these guys have been implementing."

In a move never before seen in the state, Republican Gov. Ron DeSantis endorsed a slate of school board candidates, putting his weight behind conservatives who share his opposition to lessons on sexuality and what he deems critical race theory. Most of the DeSantis-backed candidates won in their August races, in some cases replacing conservative members who had more moderate views than the firebrand governor.

The movement claims to be an opposing force to left-leaning teachers unions. They see the unions as a well-funded enemy that promotes radical classroom lessons on race and sexuality — a favorite smear is to call the unions "groomers." The unions, which also support candidates, have called it a fiction meant to stoke distrust in public schools.

In Maryland's Frederick County, the 1776 group is backing three school board candidates against four endorsed by education unions. The conservatives are running as the "Education Not Indoctrination" slate, with a digital ad saying children are being "held captive" by schools. The ad shows a picture of stacked books bearing the words "equity," "grooming," "indoctrination" and "critical race theory."

Karen Yoho, a board member running for re-election, said outside figures have stoked fears about critical race theory and other lessons that aren't taught in Frederick County.

The discourse has mostly stayed civil in her area, but Yoho takes exception to the accusation that teachers are "grooming" children. 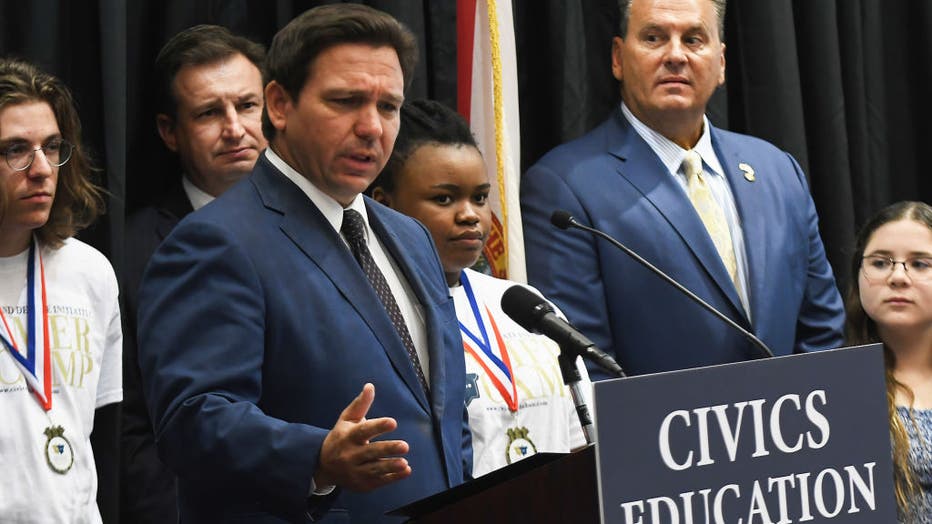 "I find it disgusting," said Yoho, a retired teacher whose children went through the district. "It makes my heart hurt. And then I kind of get mad and I get defensive."

In Texas, Patriot Mobile — a wireless company that promotes conservative causes — has emerged as a political force in school board races. Earlier this year, its political arm spent more than $400,000 out of $800,000 raised to boost candidates in a handful of races in the northern Texas county where the company is based. All of its favored candidates won, putting conservatives in control of four districts.

The group did not respond to requests for comment, but a statement released after the spring victories said Texas was "just the beginning."

Some GOP strategists have cautioned against the focus on education, saying it could backfire with more moderate voters. Results so far have been mixed — the 1776 Project claims a 70% win rate, but conservative candidates in some areas have fallen flat in recent elections.

Still, the number of groups that have banded together under the umbrella of parental rights seems only to be growing. It includes national organizations such as Moms for Liberty, along with smaller grassroots groups.

"There is a very stiff resistance to the concerted and intentional effort to make radical ideas about race and gender part of the school day. Parents don’t like it," said Jonathan Butcher, an education fellow at the conservative Heritage Foundation.

The foundation and its political wing have been hosting training sessions encouraging parents to run for school boards, teaching them the basics about budgeting but also about the perceived dangers of what the group deems critical race theory.

For decades, education was seen as its "own little game" that was buffered from national politics, said Jeffrey Henig, a political science and education professor at Columbia University's Teachers College who has written about outside funding in school board elections. Now, he said, local races are becoming battlegrounds for broader debates.

He said education is unlikely to be a decisive issue in the November election — it’s overshadowed by abortion and the economy — but it can still be wielded to "amplify local discontent" and push more voters to the polls.

Republicans are using the tactic this fall as they look to unseat Democrats at all levels of government.

In Michigan, the American Principles Project is paying for TV ads against the Democratic governor where a narrator reads sexually explicit passages from the graphic novel "Gender Queer." It claims that "this is the kind of literature that Gretchen Whitmer wants your kids exposed to," while giant red letters appear saying "stop grooming our kids."

Similar TV ads are being aired in Arizona to attack Sen. Mark Kelly, and in Maine against Gov. Janet Mills, both Democrats.