A new, wearable device may help alert you if you are exposed to COVID-19. Researchers at the Yale School of Public Health developed an easy-to-clip-on device that can help detect low levels of SARS-COV-2 and subsequently whether a person has been exposed.

GENEVA - The number of people killed by the coronavirus surged by more than 40% last week, likely due to changes in how COVID-19 deaths were reported across the Americas and by newly adjusted figures from India, according to a World Health Organization report released Wednesday.

In its latest weekly report on the pandemic, the U.N. health agency said the number of new coronavirus cases fell everywhere, including in WHO's Western Pacific region, where they had been rising since December.

About 10 million new COVID-19 infections and more than 45,000 deaths were reported worldwide over the past week, following a 23% drop in fatalities the week before.

The jump in reported deaths, up from 33,000 last week, was due mainly to an accounting change; WHO noted that countries including Chile and the United States altered how they define COVID-19 deaths.

In addition, more than 4,000 deaths from Maharashtra state in India that initially weren't included among the COVID-19 death toll were added last week, according to WHO.

WHO has said repeatedly that COVID-19 case counts are likely a vast underestimate of the coronavirus’ prevalence. The agency cautioned countries in recent weeks against dropping their comprehensive testing and other surveillance measures, saying that doing so would cripple efforts to accurately track the spread of the virus.

"Data are becoming progressively less representative, less timely and less robust," WHO said. "This inhibits our collective ability to track where the virus is, how it is spreading and how it is evolving: information and analyses that remain critical to effectively end the acute phase of the pandemic."

The agency warned that less surveillance would particularly harm efforts to detect new COVID variants and undermine a potential response.

Numerous countries across Europe, North America and elsewhere recently lifted nearly all their COVID-19 protocols, relying on high levels of vaccination to prevent another infection spike even as the more infectious omicron subvariant BA.2 is causing an uptick in new cases.

British authorities have said that while they expect to see more cases, they have not seen an equivalent rise in hospitalizations and deaths.

Despite the global decline in reported cases, China locked down Shanghai this week to try to curb an omicron outbreak that has caused the country's biggest wave of disease since the virus was first detected in the Chinese city of Wuhan in 2019. 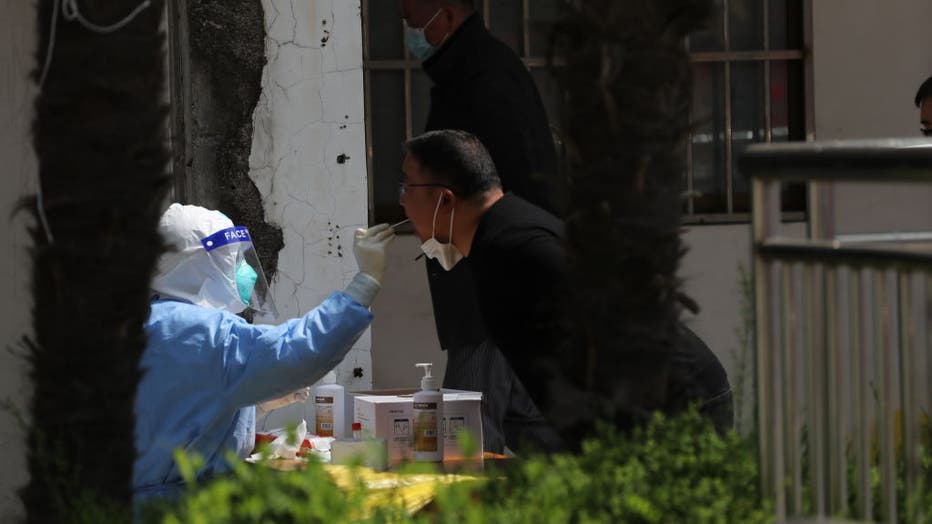 SHANGHAI, CHINA - MARCH 30: A medical worker takes a swab sample from a local resident for COVID-19 nucleic acid test at a residential community in Minhang district on March 30, 2022, in Shanghai, China. (Photo by VCG/VCG via Getty Images)

U.S. officials expanded the use of vaccine boosters Tuesday as regulators said Americans ages 50 and older can get a second booster at least four months after their last vaccination.