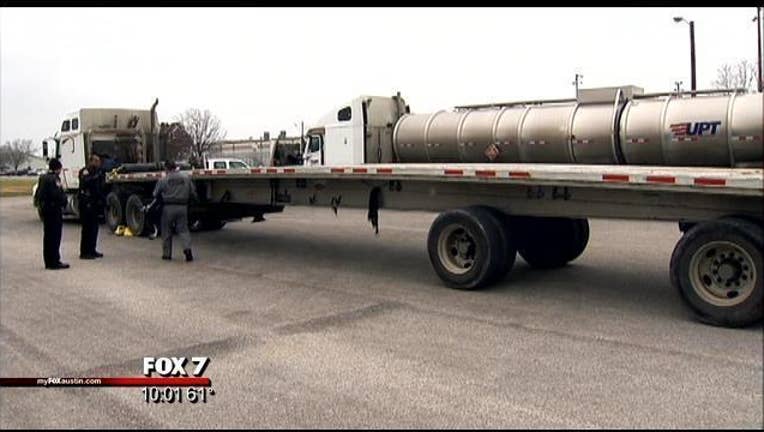 AUSTIN, Texas - More than 15,000 18-wheelers pass through the heart of Austin daily.

Just like the cars we drive, parts on those trucks break; and the drivers may not always realize it.

A Travis County deputy stops an 18-wheeler in Southeast Austin.

It's not because the deputy noticed something wrong. His selection is purely random. He guides the truck driver to another location to make sure everything is in working order.

The five deputies who make up the commercial vehicle enforcement unit are waiting.

"Do you have your license and registration," Deputy Jessie Tippie asks.

While Deputy Tippie talks with the driver, others prep for the inspection. Tippie first checks the lights. He walks around the entire truck paying special attention to the tires.

Another deputy rolls underneath the truck. Tippie's biggest concern is the brakes. This truck has one that is not functioning properly.

The issue will not put the truck out of service. The driver of the truck parked next to it is not so lucky. He was ordered to stay put until mechanics could fix his brakes.

"We did a random check on him and at that time we found that he had multiple brakes that were out of service which means he's lacking stopping power for this particular vehicle."

Adding to the scary scenario, he was hauling jet fuel.

"If you're in front of him and you stop, and he's in capable of stopping you have an 80 thousand pound vehicle on the back of your small passenger car."

During that time, 725 inspections were completed. 3,500 violations were found.

Out of the 700-plus inspections, 550 out of service violations were noted. That means the trucks had to be repaired on the spot before getting back out on the roadway. 118 inspections resulted in no violations.

"Our guys who come out with us, they're like if I knew that I wouldn't drive next to these things."

This is why the inspections are so important.

Photos FOX 7 obtained photos of an 18-wheeler that caught fire on I-35 in October. It was hauling cattle.

Deputies say the cause of the fire was faulty wiring.

These are more photos of gross violations.

Deputy Tippie says he inspected one truck where the whole front suspension was loose.

"They turn their steering and the whole axle slides back and forth on the springs. Their wheels will pop as they turn. Their whole front end was loose and they tell me they didn't know that."

"Those vehicles are going down the road and at any time that could come apart and cause a major collision."

The deputies know the risks. They conduct these inspections daily to keep drivers safe. It's not necessarily the drivers' or trucking companies' faults.

And when they don't, these deputies are sure to get any issue fixed.