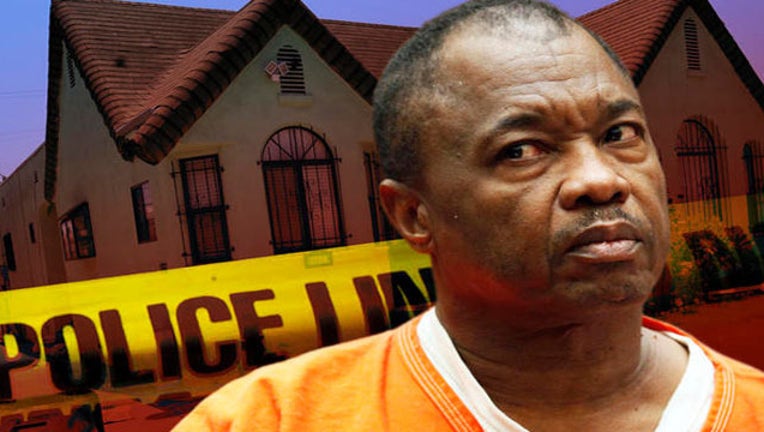 LOS ANGELES (AP) — When Bill Ware died of cancer in 2002, he still didn't know who killed his daughter, dumped her body in an alley and covered her in trash in 1987.

Barbara Ware had been shot in the chest just two days shy of her 24th birthday. She was among at least nine women and a teenage girl killed by one of the most prolific serial killers in Los Angeles history, the "Grim Sleeper."

A jury on Monday recommended the death penalty for the man convicted of killing Ware and the others, 63-year-old Lonnie Franklin Jr. His formal sentencing is Aug. 10.

Bill Ware was among a handful of parents who died either before Franklin was arrested in 2010 or before his trial came after years of delays.

"He would have been happy" with Monday's verdict, said Diana Ware, Bill Ware's 67-year-old widow, who spoke tearfully of the stepdaughter she largely raised. "That was his baby."

Parents of other victims are now in their 60s and 70s and said they were thankful to be able to get justice for their daughters.

"I'm glad I lived to see it. It's a long time coming," said 75-year-old Porter Alexander, whose 18-year-old daughter, Alicia Alexander, was found naked under a mattress in an alley in 1988. She had been strangled and shot.

"It didn't come when I wanted but it came right on time," said her mother, Mary Alexander. "God answered my prayers."

While Franklin remained still and expressionless, as a court clerk read the 10 death penalty verdicts against him, family members of victims cried. One rocked back and forth while another whispered to himself, "Thank you."

"You have the amount of victims and the delay of how many years these people have waited," she said. "These people have such strong emotions they've had to stuff down for so many years to be able to have the strength to make it to this stage. And I think that's difficult."

Franklin's defense attorney, Seymour Amster, declined to discuss his client at length, saying his client shouldn't be the focus.

Instead, he slammed the amount of money prosecutors spent on the case and the costs associated with the death penalty.

"Now what happens is millions of dollars will be spent on appeals because we have no choice but to do that," he said, adding that money would be better spent in the neighborhood where the murders happened to improve education and fight drugs.

"Who cares about Lonnie Franklin?" he said. "The question is, as a society, we must concentrate on never letting this happen again."

During Franklin's lengthy trial, Amster questioned forensic evidence and said DNA from other men was also found on several bodies. He suggested a "mystery man," possibly a relative of Franklin's, was the real killer.

Silverman said the verdicts against Franklin showed that the justice system worked, though Franklin is unlikely to be executed. Nearly 750 convicted killers sit on California's death row, the largest in the nation.

But because of legal challenges, no one has been executed in over a decade and only 13 have been put to death since 1978. Far more have died of natural causes or suicide.

Most of Franklin's killings fit a similar pattern. Women were either fatally shot, choked — or both — their bodies dumped in alleys and trash bins in South Los Angeles.

Police didn't connect the crimes to a serial killer for years, and victims' families and community residents complained the killings weren't thoroughly investigated because the victims were poor and black, and some were prostitutes who had been using cocaine.

Franklin, a former city trash collector and garage attendant for Los Angeles police, came under suspicion after a task force began re-examining the cold cases following the final killing in 2007 and DNA from his son showed similarities to genetic evidence found on some of the victims.

A detective posing as a busboy at a pizza parlor later collected utensils and crusts from Franklin while he was attending a birthday party. Lab results connected him to the bodies.

The culprit had been dubbed the "Grim Sleeper" because of an apparent gap in slayings between 1988 and 2002.

Silverman was able to introduce evidence of four additional murders during the penalty phase, including one that linked Franklin to a killing in 2000. She also presented evidence of a 1984 killing — a year before the first murder he was convicted of.

Prosecutors said they didn't charge Franklin with the additional killings because it would have delayed the case that took nearly six years to bring to trial.

The survivor who Franklin was convicted of attempting to murder helped prosecutors establish the killer's modus operandi.

Enietra Washington described getting a lift from Franklin in his orange Ford Pinto and then having him shoot her in the chest while she sat in the passenger seat.

As she was losing consciousness, he sexually assaulted her and she remembered seeing the flash from a Polaroid camera.

A photo of a bleeding and partly nude Washington was later found hidden behind a wall in Franklin's garage. Police found photos of other victims in the home.

Nearly 30 years after Washington was left for dead on the side of a road, she pointed at Franklin in court and said: "That's the person who shot me."

This story has been corrected to reflect that nine women and one girl were victims.