A Denton woman is now facing charges in connection with her 7-year-old son's death. Her boyfriend was arrested days ago for allegedly abusing the little boy.

DENTON, Texas - A Denton woman is now facing charges in connection with her 7-year-old son's death. Her boyfriend, 52-year-old Todd Shaw, was arrested days ago for allegedly abusing the little boy.

The 7-year-old died on Friday after being found unresponsive and with "suspicious and extensive injuries."

Police documents detail the horrific abuse against the boy.

"The paramedics discovered that the victim had extensive injuries all over the body. They transported him to a local hospital, and he was pronounced deceased at the hospital," said Denton Police Department Deputy Chief Frank Padgett.

Padgett said the victim's mother, Sabrina Ho, initially gave investigators conflicting stories about how he was injured. Denton police said she allowed her 7-year-old son to be mentally and physically abused for the entire month of March by her live-in boyfriend, Shaw. The abuse only ended when investigators found the boy on April 1, the day he died.

She ultimately admitted she knew her boyfriend repeatedly abused him. She also admitted to keeping him out of school and away from the doctor to hide his injuries.

Shaw was arrested over the weekend. Ho was taken into custody on Monday.

Both are now charged with injury to a child. 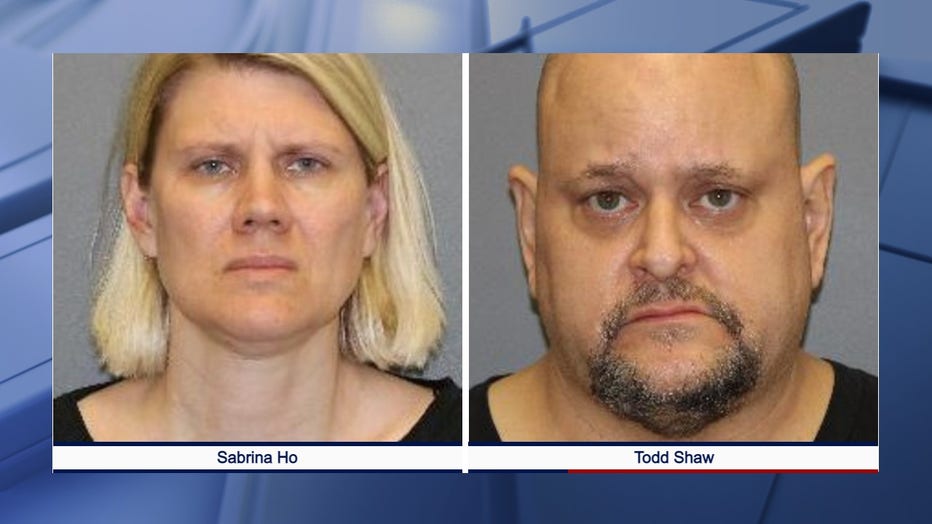 "Investigators were able to determine that a period of abuse had occurred over at least a week and probably up to a month starting with psychological abuse which led to physical abuse," Padgett said.

Karla Garcia, a neighbor, was home when paramedics rushed the boy to a hospital, where he was pronounced dead.

"We actually, unfortunately, we’re able to see the little boy whenever they carried him out," she recalled.

Their family said the couple moved two-doors-down less than six months ago. They never knew a child was living there.

"Every time I’d come, by I would never see the kid," Daniel García said.

RELATED: Man arrested after death of 7-year-old in Denton

The mother, according to an arrest affidavit, told police after her son’s death that she heard a "loud thud" from the child’s bedroom. Her boyfriend called her over. She found the boy unconscious on the ground, but admitted she waited more than five hours to call police.

Arrest warrant affidavits detail the gruesome injuries, bruising across the child’s face and body and significant injuries to his private parts.

"April is Child Abuse Awareness Month and it’s a complete tragedy that we lost a child on Day 1," Padgett said.

Injuries were so visible that she said she kept the child out of school and away from a doctor’s office, fearing she’d be in trouble.

Neighbors said they had no idea.

"It’s just crazy to think that all of these things are literally going on behind closed doors, 30 yards away from you. That’s crazy," John Castro said.

"An innocent life just can’t be taken for granted like that," Daniel added.

The Castro’s took it upon themselves to place stuffed animals, flowers, and biblical writings outside the apartment where the alleged abuse occurred.

"It just gave me chills whenever I saw the little boy," Karla said.

Police said the investigation is still ongoing and additional charges are possible.

Denton police did not provide a timetable for upgraded charges. They said they’re waiting on more evidence to move forward.