Deuces Wild, made up of Sameerha Marrel and Noelle Brown, were two Detroit-based rappers who were both part of a multi-million scheme that stole over $5 million from the IRS.

DETROIT (FOX 2) - Sameerah Marrel, one of two Metro Detroit rappers charged with stealing more than $5 million from the United States IRS, is believed to be on the run after failing to appear for multiple court proceedings related to the case.

Marrel and another woman, Noelle Brown, were both charged in July 2021 with aggravated identity theft, false claims, and conspiracy. According to the 2021 IRS complaint, the two women were part of an elaborate tax scheme where the women claimed withholdings and refunds of more than $13.6 million from 2013 to 2017.

According to court records, the two women performed as the female rap group "Deuces Wild" under stage names Creme (Marrel) and Brown.

Marrel has not been in contact with court since July 25, 2022, and, according to court records, she has missed repeated meetings with the court, pretrial services, and her own attorney.

In a court filing, Judge Linda Parker issued an arrest warrant and revoked the bond of Marrel after she failed to appear. Additionally, it's believed she claimed to work at an Oak Park wig shop that may have never existed.

On Sept. 25, Marrel spoke with pretrial services. Three days later, she was texted but no response. Between July 28 and September 28, authorities didn't say if they attempted to contact her. On Sept. 28, pretrial services called her but did not speak with her.

On Oct. 7, authorities visited the wig shop she claimed to work at. It's called "The Wig Cleaners on West Nine Mile Road in Oak Park but officials said there was no business operating at the address. The owner of a neighboring business said he bought the building recently and told officials that they were unsure what the defendant's business was as it never seemed to be up and running.

The owner told officials that someone would show up every two months or so but that the building had been vacant for approximately six months.

On Oct. 25, the attorney said they couldn't reach Marrel either. That same day, pretrial services went to her home in Bloomfield Township where an unknown man spoke with them but would not provide information about where Marrel may be.

Because of her failure to appear, her bond has been revoked a new warrant has been issued for her arrest.

The two rappers were originally arrested in 2021 and the indictment was unsealed in May 2021.

The special agent investigating the case, Tyler Goodnight, said that information from IRS's Scheme Development Center identified multiple false and fraudulent tax returns for estates and trusts set up under businesses filed between 2013 and 2017. Goodnight also said the women were involved in schemes to file tax returns for trusts using other people's identities without their consent and would get other people involved and then have those people pay the women from the refunds issued.

In those returns, Goodnight said they claimed the IRS had withheld large amounts of income tax from the trusts filing the returns.

All told, Goodnight said they falsely reported withholdings and claimed refunds of more than $13.6 million and that the IRS had paid out $5,539,049 to the women before recognizing the fraud.

According to the complaint, a total of 122 returns were all filed and were able to be linked together as part of a common scheme. Goodnight wrote that there were common pieces of information including the same payer on 1099 forms and the same return preparers on some trust returns.

Of the 122 returns, 106 were prepared and filed by paper and mailed to the IRS - 69 from Michigan and 13 from Georgia. 16 of the 122 returns were filed electronically from January 2015 to March 2016 - all from four different IP addresses, two of which were connected to Marrel.

Additionally, the payout from 16 electronically filed false returns requested refunds of almost $900,000 - of which $299,000 was paid out in six refund checks. Those went to accounts opened by Marrel and Goodnight said most of the funds were either withdrawn or immediately spent.

READ NEXT: How scammers can steal your information using fake unemployment benefit texts

Two checks were issued to two businesses - Lucid Communications and Clean Sweep Properties - both for more than $60,000 each. The woman who deposited those checks was Marrel, Goodnight said, which he confirmed in reviewing surveillance video of the deposits.

Goodnight said she also deposited a refund check made out to '"For Weaves Only Distributors Trust" for more than $31,000 and another for $57,000 to Lucid Communications. 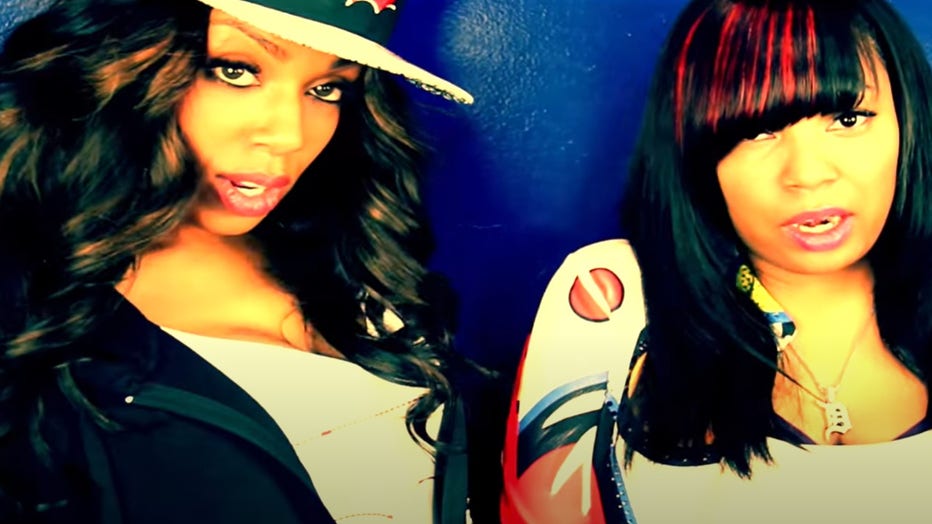 Deuces Wild, made up of Sameerha Marrel and Noelle Brown, were two Detroit-based rappers who were both part of a multi-million scheme that stole over $5 million from the IRS.

The returns filed under AK's name requested almost $2.5 million in refunds, which the IRS paid out $462,601. The funds were deposited into an account in AK's but that woman said she did not open the account.

Goodnight said money was sent from the account in AK's name to Marrel and 'JP', including more than $17,000 that was made out to LJB Automotive, which is a company registered to Marrel in the state of Michigan.

So who is JP? In May 2018, agents investigated JP, who said she was a victim of ID theft as well and said she didn't know Marrel and didn't give her permission to set up trusts or file tax returns in her name.

An Ohio license issued in JP's name had a picture of Marrel. Authorities said Marrel used the identification to open accounts, rent apartments, open a UPS Box, and purchase expensive items, including jewelry and watches.

A total of eight fraudulent tax refunds were deposited into accounts with JP's name - totaling $1,066,332.

Additionally, 14 other trust tax returns using the name JP were set up and requested $1.6 million refunds from 2016 to 2017. That money was never paid.

In September 2018, Goodnight and another agent interviewed a woman identified as CH after her name landed on a trust tax return that requested more than $51,000.

CH said she has been best friends with Brown since she was 13 and said Brown and Marrel were close friends.

She told the IRS that in 2017, Brown told her that Marrel knew how to apply for grants and was willing to help her apply for a business grant. CH gave her name, SSN, and DOB to Brown to give to Marrel.

In return, she said Marrel told her that her name would be "put into a pot and the winner would get the grant money." She said she was not told how much the grant would be or how much she would have to pay Marrel.

CH later received a check from the IRS for more than $51,000 with her name on it. She said Brown instructed her to get a cashier's check for $28,975 payable to Marrel's business, Clean Sleep Properties.

A tax return signed with her name was shown to her, but she said she didn't sign it and whoever did, spelled her name wrong. She also told the IRS if she had known a tax return would be filed, she wouldn't agree to the plan. She said she trusted Brown and knew she had applied for a grant in the past. CH questioned both women about paying taxes on the funds and said they both told her shouldn't owe anything on the money.

CH also told the IRS that Brown referred other people to Marrel and would get a portion of the money.

A fourth person, a man identified as LC, told the IRS he met Brown through a mutual friend and he was introduced to Marrel. LC said he met her once but primarily dealt with Brown, who told him that Marrel worked for the IRS and "knew all the loopholes and had an opportunity to get LC some money."

In a group phone call, the women explained they needed his name and address but didn't need his date of birth or SSN. He provided his and his wife's name and addresses but didn't sign anything. He told the IRS during the investigation that he was told to expect a check between $50,000 and $100,000 and he would get to keep $15,000.

In July 2017, the IRS received two tax returns linked to the man and his wife, both requested refunds of $78,516. Brown told LC he couldn't deposit both checks into the same account so he opened another account and deposited the first check he received in this account.

Once the check cleared, he was told to get a cashier's check for $47,858 and give it to Brown

One month later, the other chek, for the same amount was sent to him and he deposited it. He then was told to get a cashier's check for $47,905 made out to Luxley Luxury Group LLC. That check was later signed by Marrel.

In total, Brown was linked to at least 10 fraudulent tax returns totaling more than $2 million, some of which was frozen by banks and is in the process of being sent back to the IRS.

The women both face up to ten years in federal prison, if convicted.