A bald eagle was spotted being brought through security at Charlotte Douglas International Airport in North Carolina on Aug. 22, 2022. Video from Elijah Burke shows the eagle perched on its handler’s hand and flapping its wings while being screened at a Transportation Security Administration checkpoint.

'Clark' the eagle visited the travel hub on Monday, giving his wings a break and flying commercial on Southwest Airlines.

And yes, the bald-looking bird was screened like any upstanding passenger, spreading its wings for Transportation Security Administration agents. Video from Elijah Burke on Twitter shows the eagle perched on its handler’s hand at the checkpoint.

"TSA officers are used to seeing an eagle on their uniform as they look over their shoulder, but I’m sure the team at @CLTAirport Checkpoint A did a double take when they saw a real one earlier this week," TSA Southeast said in a tweet. 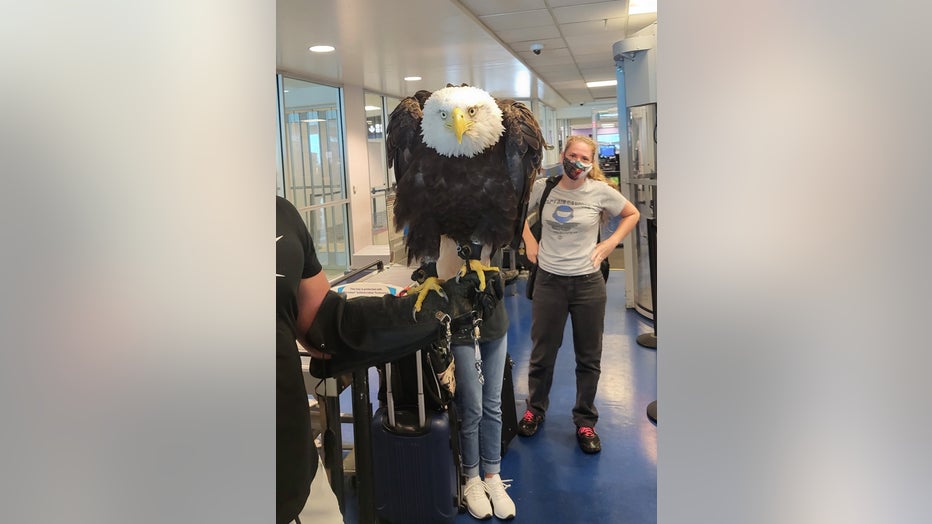 According to the World Bird Sanctuary, Clark flies five to seven times a year. The non-profit based in Valley Park, Missouri, said the bird was hatched at its conservation department in 2002 when they were breeding then-endangered bald eagles to be released into the wild.  He is now one of only four bald eagles who travel to fly at different venues throughout the U.S.

Clark began flying at St. Louis Cardinals’ baseball games to the cheers of thousands of fans for the National Anthem. He has since flown for numerous high-profile events such as The Horatio Alger Association, the Chicago Bears and Boeing’s annual event.

Needless to say, Clark is really racking up those sky miles.