They look innocent, but the combination of cookie, snowman, box, and parachute emojis can be code for ‘a large batch of cocaine has arrived.

They look innocent, but the combination of cookie, snowman, box, and parachute emojis can be code for "a large batch of cocaine has arrived." A school bus is code for Xanax; a blue heart, methamphetamine. A maple leaf represents all drugs.

"Parents should really be aware of what this language is - it's like a different language," explained Bill Bodner, Special Agent in Charge of the DEA’s Los Angeles Field Division.

He said that teens can now buy drugs online or on social media, pay with apps like Zelle or Venmo, and have the drugs delivered without their parents’ knowledge. His department has investigated cases where children as young as 14 have died.

In an effort to educate parents and caregivers about the new ways drugs are being bought and sold, the DEA has released an "emoji decoder" – detailing various ways that drug traffickers and criminal organizations are now communicating with customers.

They look innocent, but the combination of cookie, snowman, box, and parachute emojis can be code for ‘a large batch of cocaine has arrived.’ 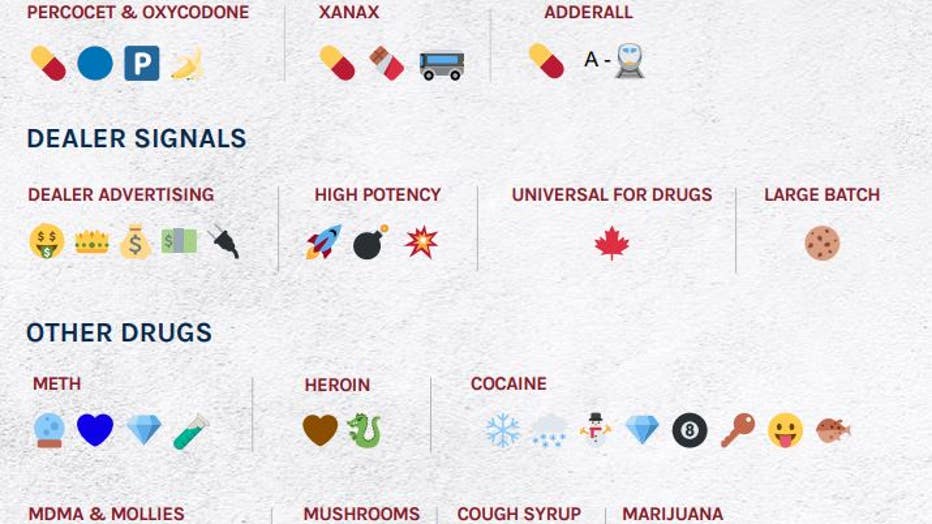 The DEA says that "emojis, on their own, should not be indicative of illegal activity, but coupled with a change in behavior, change in appearance, or significant loss/increase in income should be a reason to start an important conversation."

Bodner is particularly concerned about a disturbing spike in the synthetic opioid fentanyl showing up in drugs like oxycodone, cocaine, and molly. In 2021, the DEA seized 20-million fake prescription pills, many laced with fentanyl. That’s more than the previous two years combined.

Just two milligrams of fentanyl is considered a deadly dose.

Fentanyl-induced overdoses increasing, more drugs being laced with it

"I’ve been doing this for 30 years, this is the most dangerous drug I’ve seen on the street. The reason why is because it's killing recreational drug users, it's killing people experimenting with drugs, it's killing because of deception," Bodner said.

Interventionists and activists Jennifer Gimenez-Ryan and Tim Ryan are on a mission to educate and help parents and kids alike, speaking to students across the country and assisting families wherever they can. The husband-and-wife team both struggled with addiction and know firsthand how devastating its effects can be.

"I just think that the messaging here has to be – we have to keep an open conversation, we have to feel that we’re not alone in this world," said Gimenez-Ryan.

Experts agree — with fentanyl so prominent in Southern California, talking to kids and monitoring their online presence could potentially save lives.

"The world is changing and it's just going to take more engagement by parents to stay on top of that at home," Bodner said.