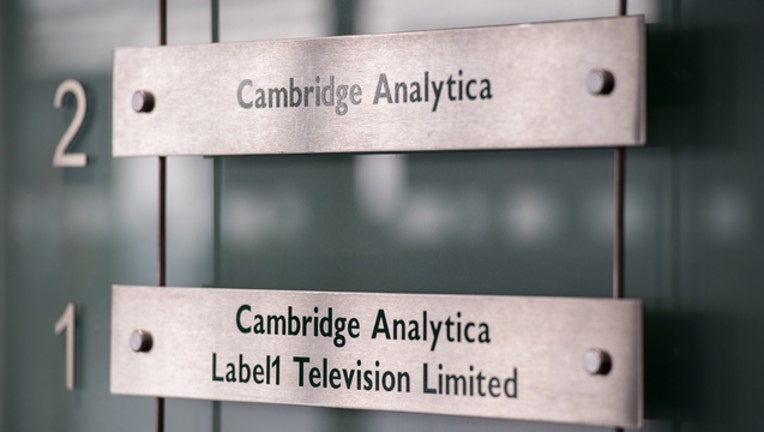 Signs for company Cambridge Analytica in the lobby of the building in which they are based on March 21, 2018 in London, England. (Photo by Chris J Ratcliffe/Getty Images)

The ads signed by Mark Zuckerberg said a quiz app built by a Cambridge University researcher leaked Facebook data of millions of people four years ago. "This was a breach of trust, and I'm sorry we didn't do more at the time. We're now taking steps to make sure this doesn't happen again," the ads said.

Facebook's privacy practices have come under fire after Cambridge Analytica, a political consulting firm affiliated with President Donald Trump's 2016 election campaign, got data inappropriately. The firm is alleged to have created psychological profiles to influence how people vote or even think about politics and society.

Facebook's stock value has dropped more than $70 billion since the revelations were first published.

The ads said Facebook is limiting the data apps receive when users sign in. It's also investigating every app that had access to large amounts of data. "We expect there are others. And when we find them, we will ban them and tell everyone affected," the ads stated.

Zuckerberg closed the ads by saying: "I promise to do better for you."

Cambridge Analytica got the data from a researcher who paid 270,000 Facebook users to complete a psychological profile quiz back in 2014. But the quiz gathered information on their friends as well, bringing the total number of people affected to about 50 million.

The Trump campaign paid the firm $6 million during the 2016 election, although it has since distanced itself from Cambridge.