Family of Trevor Reed, who is detained in Russia, able to meet with President Biden

The Granbury parents of a Marine veteran who is in prison in Russia were outside the White House in hopes of getting President Joe Biden's attention. A spokesperson for the family said President Biden did meet with them.

The Granbury parents of a Marine veteran who is in prison in Russia protested outside the White House Wednesday in hopes of getting President Joe Biden's attention. A spokesperson for the family said President Biden did meet with them.

Their protest comes as the State Department issued a new advisory warning Americans to avoid travel to Russia or Ukraine.

Trevor Reed has been in custody in Russia since 2019.

His family fears the 28-year-old’s health is deteriorating, concerned he may have tuberculosis.

With Russia hobbled by sanctions, the Reeds said it’s been even more difficult in recent weeks to talk with and support their son.

They are calling on the Biden Administration to act, and to do so soon.

Reed's parents traveled to President Biden’s doorstep Wednesday, desperate to get his help.

"Early this morning, a little after 6 a.m., we walked down to the gate where the employees, the staff comes in," Reed’s mother, Paula Reed, said. "We thought if the staff see us with our signs, they’ll think, ‘Oh hey, we were supposed to call the Reeds.’" 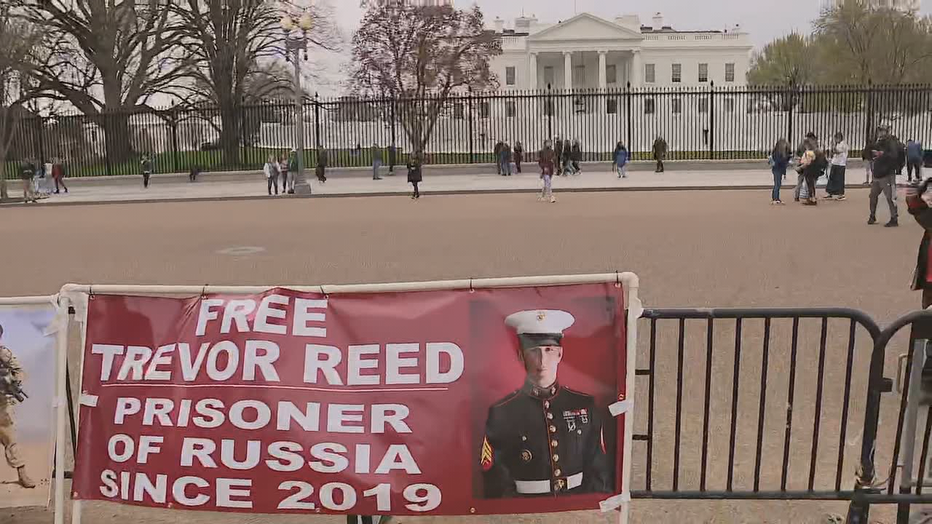 The Reeds have been waiting on a call for three weeks.

In early March, they set up a post near a VA clinic President Biden was visiting, hoping to get his attention.

They did and talked by phone, with Biden agreeing to meet with them.

RELATED: Family of Trevor Reed, who is detained in Russia, speaks with President Biden over the phone

But the Reeds said they didn’t have any luck getting anything scheduled, so they decided to head to D.C.

"Most presidents don’t want to speak to hostage families because we’re not the only hostage family, we understand that. But at the same time, our son’s physical condition, like many other hostages, is going downhill fast," Reed’s father, Joey Reed, said Wednesday.

Reed was convicted in 2020 of public intoxication and sentenced to nine years in a Russian prison.

It’s a charge his family said is bogus.

They said his health has been declining and he began a hunger strike on Monday over his treatment.

While getting a COVID-19 booster shot, Biden was asked about meeting with the Reeds.

"I’m going to see if I can get to see them. They’re good people. We’re trying to work that out," Biden said.

Reed was sentenced in 2020 to nine years in a Russian prison colony, convicted on charges of assaulting two police officers.

And ultimately, a meeting came together.

A spokesperson for the Reeds tweeted that President Biden was incredibly gracious.

The Reeds have not yet spoken about that conversation and whether there was any concrete action pledged.

The White House also has yet to comment on that meeting.