AUSTIN, Texas - The family of a murdered South Austin man shared new details about the case with FOX 7 Austin. They hope it will encourage someone to come forward.

Wendy and Martin Martinez are asking their son's killer to "come forward."

"You probably need help with something. I don't know what that is but that’s not something someone does… They need help so this doesn’t happen again." said Wendy Martinez.

A middle child, Nikolas grew up in Bertram. He spent three years in upstate New York before moving back to Texas. In 2020 he moved to Austin. At the time of his death, he was an employee at Qal-Tek in Round Rock. He worked as a Construction Materials Testing Technician.

"Sometimes it's like he's just off doing a trip, you know, for work… But then we get together and he's not there." cried Wendy Martinez.

Nikolas was murdered in Austin on a Friday. He planned to spend the rest of that weekend in San Antonio for his sister’s 22nd birthday. "It’s hard to be all together with him missing," said Wendy Martinez.

"My nephew stayed up waiting for him to come back." sobbed Wendy Martinez.

Martin and Wendy Martinez say Nikolas left the apartment with only his keys — he left his wallet and cigarettes behind.  At 10:30 p.m. Nikolas called 9-1-1 and told the dispatcher he had been stabbed.

He drove himself to a Conoco gas station less than one mile from his apartment. "And then he got out of the car and tried to get people to help him. And that was it. It was too late." said Wendy Martinez.

Nikolas was pronounced dead at Conoco at 10:47 p.m.

Police found a knife with neon highlights inside Nikolas’ car. They want to identify its owner. "The knife was with him. That's another thing I don't understand. Were they in the car, were they breaking in? Did he catch them?" Wendy Martinez questioned. 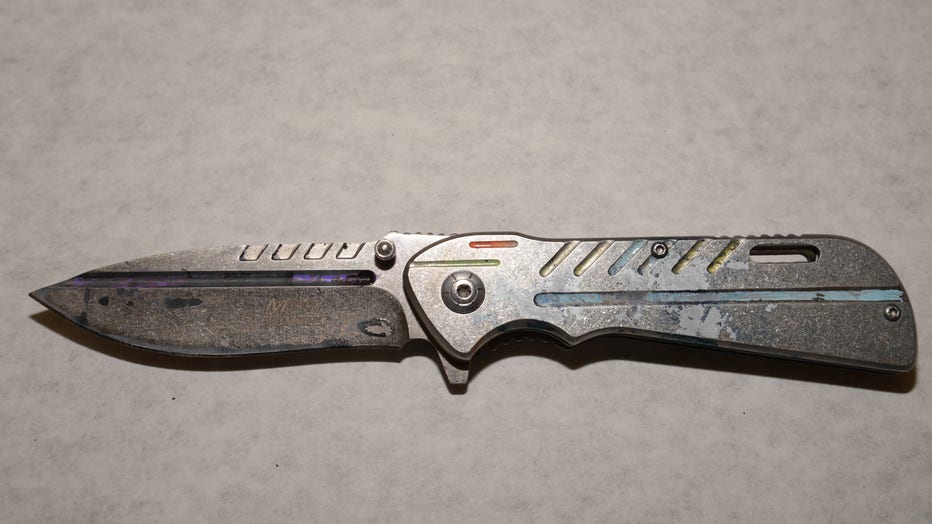 Photo of the knife the Austin Police Department believes was used to stab 23-year-old Nikolas Eugenio Martinez on July 23, 2021.

The Martinez family is asking the community for help. "My son deserves some kind of justice and closure. We deserve that. We're good people. We're everybody. You know, everyday people. We’re a middle-class, hardworking family." said Wendy Martinez.

Nikolas is remembered as sweet, fair, and quiet. He liked theater — his mom jokes he had a "rubber face" because he was so expressive. He also enjoyed video games and anime.

The Martinez family is offering an $8,000 reward to help find the person responsible.

Detectives are asking anyone with information or video of the incident to call APD Homicide at 512-974-TIPS, email homicide.apd@austintexas.gov, utilize the Crime Stoppers tip line at 512-472-8477 (TIPS), or the Crime Stoppers app. You may remain anonymous.  You can also submit tips by downloading APD’s mobile app, Austin PD, free on iPhone and Android.