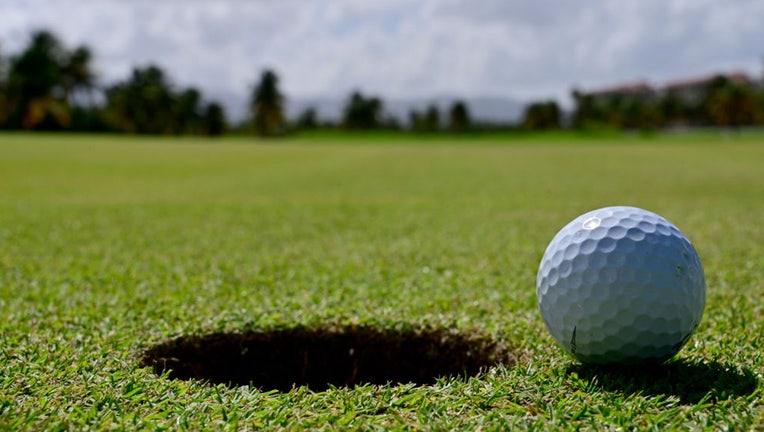 FILE - Golf ball inches from the hole on the green. (John McCoy/Getty Images)

"Fore!" is probably something one Massachusetts family will no longer have to hear after winning a lawsuit against a neighboring country club that pelted their home with golf balls for nearly four years.

The Tenczar family of Kingston, Massachusetts, was awarded nearly $5 million in damages in December 2021 after their home, and mental health, suffered major damages from golf balls flying onto their property from the Indian Pond Country Club nearby, according to court documents.

The family originally savored the beautiful views of the 15th fairway that abutted their property and the quiet neighborhood they felt so lucky to join in 2017, but soon golfers began showing up in droves and their once idyllic home turned into what felt like a battlefield, The Boston Globe reported.

Windows were shattered, the siding on their home had numerous golf ball-sized dents and the Tenczars were genuinely afraid for their children’s safety.

Over the past four years, Erik and Athina Tenczar gathered nearly 700 golf balls that landed on their property, according to The Globe.

In an effort to prevent further damage, the family put up a wall on their own dime but the golf balls kept coming, according to court documents. The Tenczars even consulted with golf course experts to put netting up around their home but were told no net could be constructed high enough to prevent the onslaught, according to The Globe.

After having enough, the Tenczars decided to take the country club to court.

The trial lasted six days and the Tenczar family won.

The country club was ordered to pay over $4.9 million to cover damages and legal fees, court documents stated. Additionally, the club was given a permanent injunction to hopefully stop any future damage to the Tenczar’s home.

Following the verdict, the country club reconfigured the 15th hole and the Tenczar family hasn’t seen a golf ball since, according to The Globe.

But the battle isn’t over.

The country club plans to file an appeal against the injunction, The Globe reported.

"I’m extremely confident that the injunction will be struck down," the club’s lawyer, John Flemming, told The Globe. "In my opinion, as a matter of law, the verdict of $3.5 million for alleged emotional distress is against the weight of the evidence."

And as for why the Tenczars don’t just jump ship and put the house back on the market — who would want to buy it after their debacle?

"Would you buy it?" Athina asked The Globe. "We’re not going to give this to another family."