Federal agents are looking into threats from students at Naaman Forest High School in Garland.

Security was increased there Friday, and that will extend until the end of the school year.

Because FBI investigators did not find a credible threat, the school day continued as normal despite an enhanced police presence Friday.

No classes were canceled, but at least two students are not allowed back on any Garland ISD campus as part of a FBI investigation.

"That is not funny. I am nervous just getting the information, just how close it is to home," Garland parent Shanese Wise said.

There was confusion among parents in the afternoon pick up line Friday at Naaman Forest High School in Garland, with multiple law enforcement agencies parked out front.

"Now that I read about it, I am concerned about it," parent Christina Hevana said.

The FBI and the North Texas Joint Terrorism Task Force notified the Garland Police Department that they launched an investigation due to online threats directed at Naaman Forest High School, making reference to harming and killing students at the school.

In a letter sent home to parents from Garland ISD, the threat came from a group of individual, and at least two of them came from Naaman Forest HS.

The district and law enforcement did not elaborate on what kind of actions were threatened or why.

Wise said she didn’t find out about the threat until she picked up her sophomore.

"It’s alarming and scary because I send my son here for education and I expect him to come home at the end of the day," she said.

The FBI determined there was no credible threat.

"Maybe they will learn from it, not to do this stuff, because it is scary," Hevana said. 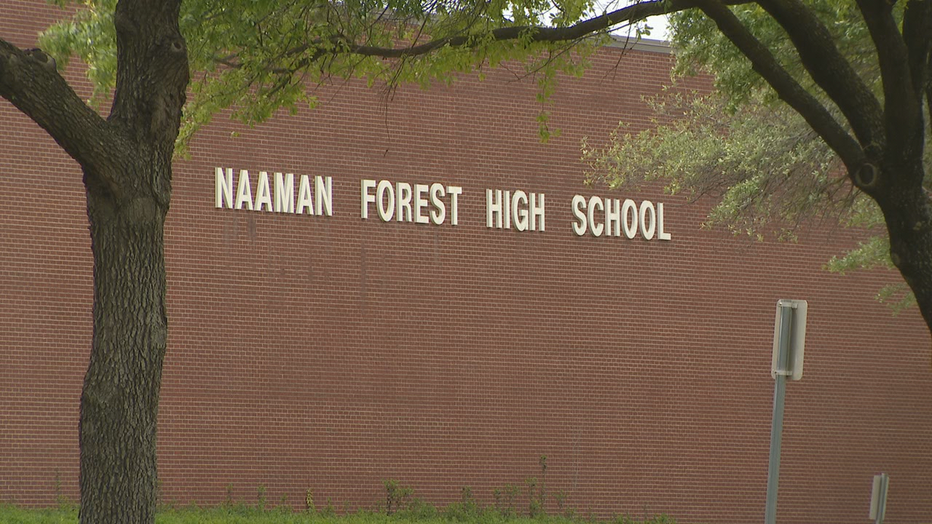 The district announced the students who made the threats are suspended indefinitely and will not return for the rest of the school year.

The students are no longer allowed on any Garland ISD property.

"Because of threats made and shootings in the country, we want to make sure that anyone our district knows if we hear any threat we will investigate it fully," Barineau said. "That includes known associates, family members, making in-home visits, and arresting if necessary."

Garland police said, right now, the students are not facing any charges, but the investigation is ongoing.

Investigators wouldn’t elaborate how many students are involved and if the threat spans to other schools.

"And I will be speaking to my son about this situation to see if he’s heard of it or aware of it," Wise said. "And if you hear anything, you report it."

The Garland Police Department said there will be extra patrol at all Garland schools for the remainder of the year.